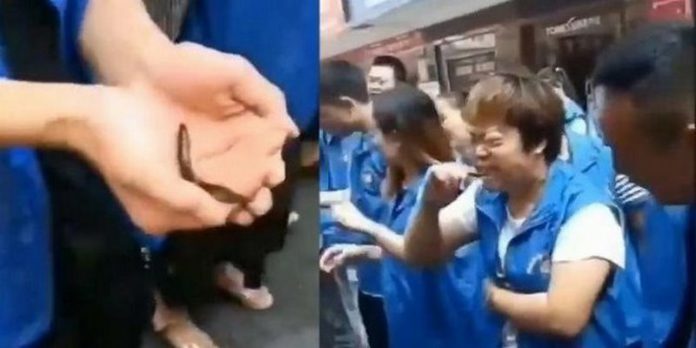 A sales company in Guizhou, China, has come under fire for forcing employees to eat live mudfish and drink chicken blood for failing to meet their set goals.

News of the extreme punishment employees of a Guizhou construction material store was recently subjected to broke out after a video of the ordeal was leaked online. It showed a man handing out live mudfish from a plastic bucket to about two dozen employees and instructing them to “bite it until it breaks”.

The video also shows the poor people drinking a strange liquid reported to be chicken blood, and then grimacing and retching in discussed. Faced with video evidence, a spokesperson for the company admitted that the event took place, but claimed that employees volunteered to take part.

A representative of the construction material super-store told Chinese newspaper Beijing News that the incident did indeed take place on August 4 and involved about 20 employees who had failed to meet their sales quotas. However, he emphasized that employees volunteered to eat live fish and drink chicken blood, as a form of motivation to do better in the future.

The South China Morning Post backed up that statement in a video, claiming that most of the participants in the event were shop owners who decided to punish themselves by eating raw fish and drinking animal blood, but social media users were not convinced.

After the shocking video went viral online, the local labour department told reporters that they had started an investigation into the incident. However, if past such events are any indication, the owner of the company and his managers won’t have to deal with too harsh of a punishment.

Such rituals to shame employees into performing better are quite common in China, despite the country’s labour laws preventing employers from shaming employees and enforcing corporal punishments. In recent years, we’ve seen ruthless bosses force their workers to crawl on all fours in public and eat live worms or cockroaches for failing to meet sales targets.

As always, Chinese social media users have condemned the actions of the employer, but unless the state steps in, public outrage isn’t going to stop such things from happening again.

“This ‘punishment’ is common among companies selling building materials. I really don’t know how these bosses think of these things… ‘Voluntarily’? More like afraid to lose their job. These evil bosses are perverted,” one Weibo user wrote.

“They are just showing up for work and their dignity is gone,” another outraged person commented.