Ghana forward, Mohammed Kudus scored and grabbed an assist to help Dutch giants, Ajax defeat Rangers 3-1 in the final round of the Champions League on Tuesday evening.

The 22-year-old set up Berghuis for the first goal in the first half.

Kudus, however,  found the back of the net in the 29th minute to give the away team a 2-0 lead.

The Black Stars midfielder put the ball into the net in the 57th minute but VAR canceled the goal.

Rangers pulled one back in the 87th minute, James Tavernier scored from the penalty spot to make it 2-1.

Ajax added their third goal in the encounter through Portuguese youngster Francisco Conceição.

The former FC Nordsjaelland and Right to Dream Academy player was also named the Man of The Match following his impressive performance.

He scored four goals and provided an assist in his 6 appearances for Ajax.

Ajax has six points after six games in Group A and will play in the Uefa Europa League. 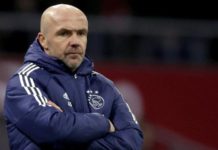 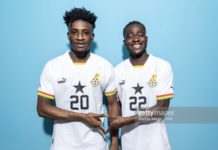 This photo of Kudus and Kamaldeen will make your day