Mr Osei-Owusu who doubles as the Chairman of the AC, claims the consensus reached by the committee to vet Justice Anin-Yeboah on the said date was based on the suggestion of the Minority leader, Haruna Iddrisu.

He said Minority Leader’s suggestion was to have parliamentary sitting extend to December 23, to create room for the vetting of Justice Anin-Yeboah.

But, Mr Mubarak has denied the claim of the First Deputy Speaker, saying such a consensus was never reached.

Rather, he accused the First Deputy Speaker of rushing parliamentary processes to approve the nominated Chief Justice because of his personal relationship with the nominee.

Addressing the issue in a heated debate on Joy FM’s News Night, both members of parliament called the other a liar.

“This is shocking, I’m disappointed in the First Deputy Speaker, he is calling us liars, he is the biggest liar,” Mr Muntaka Mubarak said.

“Anybody who says I am sacrificing parliamentary proceedings on the altar of friendship and all that is a liar, Muntaka and Haurna are liars; they are liars I repeat,” Mr Joseph Osei-Owusu said in response.

According to the Minority Chief Whip, the common practice of the committee is to advertise nominees for two weeks after which they are vetted and subsequently approved by the committee.

But, according to him, in the case of Justice Anin-Yebaoah, Mr Osei-Yeboah wants the advertising, vetting and approval of the nominee to be done in a week.

This, he says, is not allowed, further accusing the Chairman of the committee of sacrificing parliamentary proceedings on the altar of long-time friendship and familiarity.

Reacting to the accusations of his colleague, Mr Osei-Owusu said the committee, when it met, agreed that Justice Anin-Yeboah be vetted on December 21.

He said the Minority has made a u-turn on the decision because they consulted with other party members who do not agree with the decision taken by the Committee.

He added that the decisions of the committee will not be subjected to the directions of persons who are not members of parliament.

“And if that’s what they call bad faith, then let it be so called,” he added.

He rubbished claims by the Minority in parliament that he was rushing committee proceedings to have Justice Anin-yeboah approved due to the friendship they share.

Further stating in his defence that this was not the first instance the committee had vetted and approved a nominee in a week or even less than a week.

If approved, Justice Anin-Yeboah who is the fourth longest-serving Justice of the Supreme Court, will succeed Justice Sophia Abena Boafoa Akuffo who retires on December 20, 2019.

Listen to the two men accuse each other of lying on live radio in the audio above. 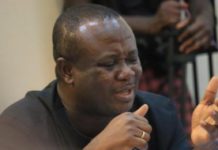