Detectives from the homicide department of the Directorate of Criminal Investigations (DCI) Kenya, have arrested two main suspects behind the double murders of Mombasa-based Dutch tycoon, Herman Rouwenhourst, 55 and his guard.

The investigators narrowed in on the two after close to two months of investigation into the murder of the 55-year-old businessman and his guard Evans Bokoro on June 4th.

The investigations have now come full circle after his wife, Riziki Cherono, was arrested as a co-conspirator in the murder just days after the tragic double homicide.

In an update on social media on Sunday, the DCI revealed how Cherono plotted her husband’s murder after he informed her of his intentions to dissolve the marriage.

The two suspects nabbed by the DCI revealed how Cherono set up a meeting on May 10 where the plan to kill Mr Rouwenhorst was hatched.

Cherono even went to the extent of inviting Timothy Omondi into her home where he took photos that aided them during their killing mission.

On a fateful night, Cherono opened the door for the killers who went ahead to complete their mission before making away with Ksh 3 million from the couple’s safe.

To cover Cherono’s tracks, the killers staged a kidnapping from which Cherono was rescued by the police after making distress calls to the authorities

Herman Rouwenhourst who owned multiple properties and nightclubs scattered across Mombasa and Kilifi counties was found lying lifeless on his matrimonial bed with multiple injuries on the head, with his hands and legs tied and his mouth gagged. His guard also died under similar circumstances bearing injuries similar to those of his employer.

“Investigations have revealed that the slain tycoon had notified his wife, Riziki Cherono of his intentions to divorce her, following endless wrangles that had rocked their marriage.

However, Cherono didn’t take that lying down and hatched a plot to eliminate her husband, with whom they had two children aged 14 and 12,” DCI said in a statement.

“On May 10, 2021, she constituted a meeting between the two suspects Rashid and Nekesa, a former manager in one of Rouwenhourst’s hotels.

In a chilling confession to detectives on how they planned and executed the murder, Nekesa disclosed that Cherono had earlier taken Rashid to their home on a recce mission to familiarize himself with the home.

“To complete the details into the murder plot, Rashid took photos of the bedroom where the deceased was later found dead.

He was promised a handsome pay upon completion of the task, from money that the deceased kept in a safe in the couple’s bedroom.

“Investigations have further revealed that on the fateful night of the murder, Cherono opened the door to their apartment letting in Rashid and other suspects still at large, to stage the cold-blooded murder.

They then took off with over Sh3 Million.

Omondi went ahead to purchase land in Kiembeni with the proceeds from the murder and built a four-bedroom bungalow.

The suspects will be arraigned in court on Monday where they will be charged with the two murders.

27-year-old farmer kills cousin for gossiping about him 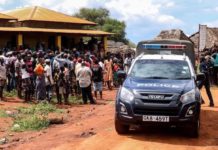 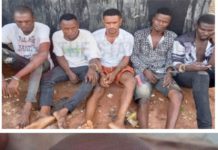