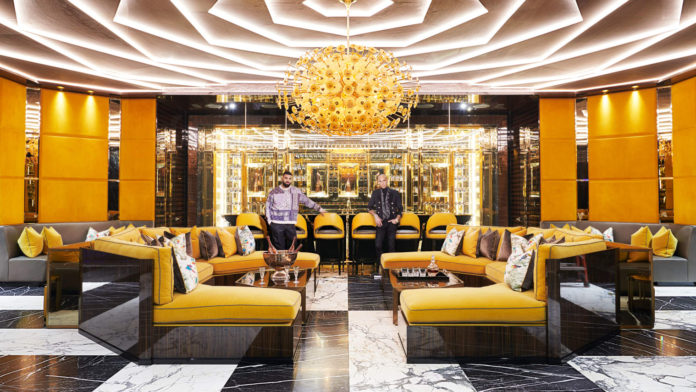 A one-ton bed, a two-story closet and a 4,000-pound bathtub carved from a single slab of black marble — Drake’s Toronto mansion is a case study in extravagance. Then, of course, there’s the NBA regulation-size basketball court, the recording studio and an atmospheric indoor swimming pool.

Now, as he offers Architectural Digest a comprehensive look around his home, the Canadian rapper is hoping to shine a light on the design inspiration behind the multi-million-dollar project.

The magazine’s forthcoming cover story contains more than a dozen photos taken throughout the 50,000-square-foot property. It also features an interview with the creative force behind the custom-built home, designer Ferris Rafauli (pictured with Drake, above), who describes how he put a contemporary spin on Beaux Arts architecture.

“In form, materials and execution, the structure is a proper 19th-century limestone mansion,” Rafauli is quoted as saying. “But the exterior profiles are more minimal and the lines are a bit cleaner. This isn’t stucco, paint and fake gold. That’s not what Drake wanted, and that’s not what I do.”

Drake’s mansion — which he dubs The Embassy — drips with various other luxurious materials including bronze, black granite, macassar ebony and brown agate. Decorations include sculptures by American artist KAWS, as well as a selection of Grammy Awards and an entire hallway dedicated to sports stars’ jerseys.

“It’s overwhelming high luxury,” Drake told Architectural Digest (AD). “That message is delivered through the size of the rooms and the materials and details of the floors and the ceilings. I wanted to make sure people can see the work I’ve put in over the years reflected from every vantage point.”

From the ground up

Drake has previously given fans a glimpse into his mansion on social media, and in videos for “When To Say When & Chicago Freestyle” and new track “Toosie Slide.” But the new photo shoot offers an unprecedented look at its design, including the 3,200-square-foot master bedroom, that basketball court (featuring his brand’s owl logo in the center circle) and an ornate yellow lounge that Rafauli described as “modern Art Deco.”

“Drake’s world completely revolves around music, so he wasn’t going to buy just any piano,” Rafauli explained. “This prized possession is an authentic marriage of artistry, craft and quality.”

The mansion’s story dates back to 2015, when Drake bought a plot on Toronto’s exclusive Park Lane Circle for a reported $6.7 million. He subsequently demolished the existing bungalow to make way for his huge, high-ceilinged home. The rapper, who in 2019 had a net worth of $150 million according to Forbes, said the home demonstrates his desire to “forever remain solid in the place I was born.”

“Because I was building it in my hometown, I wanted the structure to stand firm for 100 years. I wanted it to have a monumental scale and feel,” Drake is quoted as saying in Architectural Digest, before adding: “It will be one of the things I leave behind, so it had to be timeless and strong.”

As well as providing creative direction, Rafauli designed a number of items in the house himself, including a shearling banquette and an eye-catching bronze-and-marble chandelier. He and his celebrity client also acquired items by Italian firm Venicem and New York’s Lumifer, as well as textiles by the likes of Alexander McQueen and Jean-Paul Gaultier.

“Once you’ve chosen a certain style,” Rafauli told the magazine, “you can dance within that style.”