Asantehene Otumfuo Osei Tutu II has advised political parties to follow laid down procedures to if they are unsatisfied with the outcome of the December polls.

He urged them to use the courts to settle any misunderstandings rather than resorting to improper means like violence.

His comments follow a lot of cases of violence which have characterised the build-up to the elections.

The Asantehene wants politicians to stick to an issues-based campaign rather than commentary that will fuel tensions ahead of the December 7, elections as neighbouring countries grapple with political unrest.

“We abhor electoral violence as a society. We have no other country apart Ghana. It rather prudent to send a message to the electorate and the superior argument will persuade the people to vote for your candidate,” he said.

He made these comments when the Vice President, Dr. Mahamudu Bawumia paid a courtesy call on him at the Manhyia Palace as he commenced his tour of the Ashanti Region.

Meanwhile, the Vice President has given assured that the message of peace will be preached alongside the campaign message.

“We are here to speak to the people of our record as a government and we are committed to entrenching the peace and stability during and after the election,” he pledged.

He asked for the blessings of Otumfuo Osei Tutu II for his political party ahead of the polls. 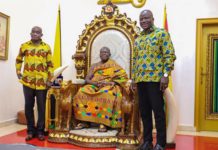 Be focused on the job – Asantehene to Samuel Jinapor 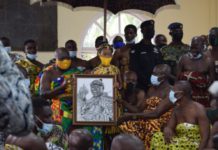 Celestine Donkor reacts after a political party offered her GH₵ 3,000 to mount stage