Adomonline.com
Home Entertainment Chale Wote photos: The beautiful are not truly lovely, it is the...
Facebook
WhatsApp
Twitter
Telegram
Email
Pinterest
Print
Huge buildings of big business on the highstreet, elbow Jamestown into nonentity.
Among the few cosmopolitans who would come here, would be officials of the Statistical Service to count the speed of reproduction and tell another depressing story of choked gutters and children giving birth to children.
But here in this corner is exactly where an amazing new ritual -Chale Wote – has turned the ‘frog’ of underdeveloped towns into a prince courtesy the kiss of love by the lovers of art.
Late Saturday afternoon, many youths wriggle around the Bank of Ghana building, the Barclays head office, past an Anglican chapel and stream in like tributaries trying to join the seaside festival at Jamestown.

The Chale Wote is Ga for ‘let’s go’ and so off we went in a stream of people that never run dry until late into the night. The ladies outnumbering the guys, perhaps 3 to 1.
We came to the seaside. Others came from the sea to the town. Gold and slaves was once  an attraction. Today,however, it is culture, art and paintings.

Canadians, French, Argentines, Australians and folks from Lesotho ditched the more advertised venues of tourist attraction for a heavily under-advertised cultural festival.
Some of them are actually exhibitors and artists who came freely to exhibit paintings, draw on Ghanaian walls and also soak in other works of art.
Perhaps the most watched piece of indoor art was this painting titled ‘He drinks from the well’.

People’s eyes lit up at the simple painting. And someone’s pocket opened at the sight of it.
It had been bought for ₵6,000. Based on Chale Wote’s 2017 theme, ‘Wata Mata’, the artist explained, every man ought to find re-hydrating satisfaction from erh – women’s wells.
But folks won’t pay attention to the explanation, they just watched, beamed, ogled, gazed and inspected it like an offence at a traffic light.
And then took selfies of a man drinking deeply from a glass placed between a woman’s legs as if there was something more to this than a simple act of drinking – or was there?
And then there was this other painting. A standpipe behind a man’s head with water flowing through him and into a woman. That’s all I can say. Let’s just watch.

Ladies posed for pictures with Kwame Nkrumah as if they were not aware of a debate over whether Ghana had founder or founders. But at Chale Wote, there were no drawings of the Big Six. Only the big one.

At Chale Wote, we roamed through the roaming minds of artists and watched with long lenses, the work of colours. A pregnant foreigner watched with her unseen baby, the drawings and paintings.
The suspicious physical integrity of old buildings at Jamestown didn’t matter. It was the new drawings on them that held the enigma.

And these many scenes drove home a most powerful lesson sitting back and watching the revellers and enthusiasts. That Chale Wote is a compelling story of how loving something suddenly makes it beautiful.
Suddenly to my mind, all the music videos of love songs lied. All the beauty pageants and its gorgeous-looking contestants lied. Even the heartbreaking epic story of the Titanic lied, for the heroine was beautiful.
It would have been true if she was unimpressive.
For the squalor of Jamestown vanished under the brush of artists who loved it, who gave their love for art as the necklace that made the town beautiful.
At Chale Wote, beautiful ladies hugged ugly walls for selfies because the transforming power of art had made it beautiful.
Ladies held broken walls in a romantic embrace because creativity had made the wall whole, even hallowed.

Like the angel stirred up the dirty pool of Siloam to bestow on it healing powers, the organisers had stirred up the unimpressive environment to confer on it, star-attraction status.
There were so many lessons to be drawn from the drawings around the gutters and canvasses. That those who married for beauty are not yet in love. For true love must love the unlovely. Like a disfiguring pregnancy, old age or accident.
It suddenly became clear why Accra is dirty and Ghana is poor.  It is not because laws don’t work or people are dirty. It is because, the city like the country is not loved. 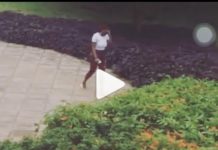