Deputy Minister of Gender Children and Social Protection, Mrs Gifty Twum Ampofo, has announced government’s move to enroll households with cerebral palsy on the Livelihood Empowerment Against Poverty (LEAP) Programme.
She said the initiative was to reduce the financial burden of caring for children with the condition and other special needs on parents and caregivers.
Mrs Twum Ampofo said over 200,000 households had benefited from the LEAP initiative, of which over 130,000 were children and added that as the programme was being expanded, it was expedient to include households with caregivers of children with special needs, critical among them, Cerebral Palsy.
The Deputy Minister was speaking at the opening of a two-day national conference on Cerebral Palsy organised by the Samuel Wellington Botwey (SWEB) Foundation in Accra on the theme: “Inclusion Matters: Count in Children with Cerebral Palsy.”
The conference aims at involving a wider group of stakeholders to examine the needs of children with Cerebral Palsy and their parents and to learn about the current state of services offered in the country to address those needs in the areas of health, physiotherapy, education and social participation.
Mrs Twum Ampofo called for a concerted effort for the holistic development of all children especially those with special needs, and a “coordinated national thinking of stakeholders to tackle cerebral palsy frontally.”
Additionally, she invited the presentation of a collated data on the condition to the Ministry for national consideration and policy formulation on support provision to Cerebral Palsy caregivers.
Mr David Botwey, the Executive Director of the SWEB Foundation, explained that Cerebral Palsy as a disabling condition that affected the part of the brain responsible for sensory and motor coordination, resulting in impairment to speech and other senses.
He said notwithstanding the increasing cases of Cerebral Palsy especially among children in Ghana, little was being done in terms of inclusive policies, appropriate rehabilitation and other forms of services and support for parents of children living with the condition.
Mr Botwey, however, commended all partners, stakeholders and Cerebral Palsy Africa for the support for the commencement of the conference.
Mrs Jedidiah Abanga, the Programme Coordinator Inclusive Child Development, Presbyterian Health Services, said research had indicated that cerebral palsy is the most occurring disability among children in the world over with 150 million living with the condition, 80 per cent of which are in lower and middle-income countries.
She said the research had also shown that children with cerebral palsy greatly suffered from malnutrition leading to underweight and stunted growth.
There was also a high rate of mortality over the two years period within which the research was conducted as well as social discrimination both in the communities and the schools.
She advised that healthcare givers especially doctors should give the right information and education to parents whose children suffered from cerebral palsy upon detection to save the situation at an early stage.
Mrs Abanga said this was necessary as many cerebral palsy cases had been worsened due to ignorance on the part of parents and teachers who cared for such children.
She therefore urged that there should be a multidisciplinary approach to support children with cerebral palsy and their family, review of national nutrition guidelines, identify and strengthen opportunities for inclusion of children with disabilities including special needs of cerebral palsy patients.
She called for the need to utilise research to inform national advocacy campaigns to address issues related to disability. 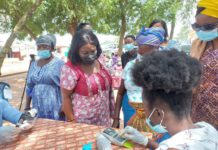