The issue of pilfering is fast becoming a nationwide concern as another suspect has been captured on footage.

A female thief has been captured on CCTV pilfering from an office believed to be located in the Ashanti Region.

The footage captured her sauntering alone in an office before she moved closer to the counter where the phone was kept in charge.

Under the pretense of grabbing a notepad, the thief snatched the phone and turned it off before sliding into her bag.

She quietly headed for exit before any of the occupants returned. 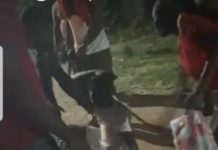