Adomonline.com
Home News Local News Boy, 5, calls 911 to report Grinch stealing Christmas, police make arrestc
Facebook
WhatsApp
Twitter
Telegram
Email
Pinterest
Print
A 5-year-old Mississippi boy called police to prevent the Grinch from stealing Christmas — and police made an arrest.
TyLon Pittman saw a video clip of How the Grinch Stole Christmas and decided to call his local police department in Byram, Miss. on Saturday to report the green Dr. Seuss character’s intentions. A 911 dispatcher eventually got TyLon’s father on the phone, who scolded his son.
“Boy, you better stop watching so many cartoons!” he said as the dispatcher laughed.
But instead of blowing off the call as a prank, police showed up to TyLon’s house to let him know that his Christmas won’t be stolen.
“I can NOT make this up!!! My 5 year old brother called the police and said that the Grinch is stealing people Christmas and he don’t want him to steal his so they really came to our house!” TeDera Dwayne Graves II wrote in a post on Facebook.

“I asked [TyLon] if he saw the Grinch, what would he do, and he said he’d call us and get us to come take him to jail. So I ended up looking around and I found him,” Byram Police Officer Lauren Develle told the Clarion Ledger.
On Monday, police arrested the Grinch and brought TyLon to the station to confront identify him.
“You have saved Christmas for the people of Byram,” the Grinch told TyLon. “Your bravery is unmatched. You have saved the day.”
Source: UPI.com 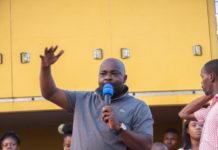 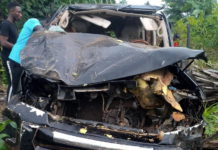 Selected Madina roads to be closed to Christmas hawkers 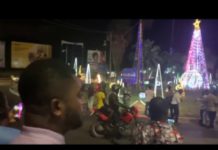 Videos, photos of colourful lights in Accra ahead of Christmas

NPP will win by 87 percentage at Suhum – NPP Communicators