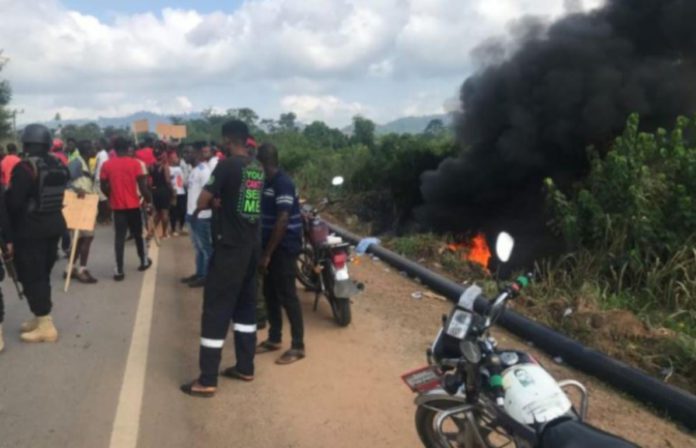 The Bibiani Police command has begun investigations into a demonstration by the youth of Bibiani to stop Ogyeahoho Yaw Gyabi II, Chief of Sefwi-Anwhiaso from performing some rites at the Mensin Gold Mine to kick start operations.

The demonstration, held on Wednesday, July 20, resulted in six people sustaining gunshot wounds and several others sustaining serious injuries at Bibiani in the Western North Region.

The victims were rushed to the Bibiani Government Hospital and the Divine Love Hospital where they are receiving treatment.

Ogyeahoho Gyebi II, who doubles as the President of the National House of Chiefs, had gone to Bibiani to perform a rite to officially open the Mensin Gold Mine when the demonstrators began firing at the precinct of the Mine.

The demonstrators, mostly the youth, numbering more than a hundred, clad in red and black, gathered at the shrine to prevent the Chief from performing the rites with claims that Ogyeahoho Gyebi, is not the legitimate chief to perform the rite for the Mensin Gold Mine but rather, Nana Ngoah Anyimah Kodom ll, the chief of Bibiani.

They accused the management of the Mine of refusing to employ them, a situation which resulted in the Wednesday demonstration.

According to them, the Management of Mensin Gold Mines Limited, the Assembly and traditional authorities had refused to employ the youth in the Municipality.

The leader of the group, Mr Kwame Tarbi, speaking to the media, pointed out that mining companies such as Chirano Gold Mines Limited, Ghana Bauxite Corporation and Mensin Gold Mines were all based in the Municipality, but had no significant impact on the lives of the youth in the area.