Hours after Alfred Amoah perished in a ghastly accident at Apedwa, near Tafo in the Eastern Region, Dr Bawumia has paid tribute to his late party member.

He described the late MCE as a dedicated patriot who served with dignity and passion.

A police situational report indicated that the MCE and his driver were travelling from Accra to Bibiani when a diesel track veered off it’s lane and crashed into multiple cars including the MCE’s Nissan.

The MCE and his driver got trapped in the vehicle and both are suspected to have died on the spot.

With the help of the National Fire Service from Bunso and Kibi the bodies of the deceased were removed and sent to Kibi Government Hospital where they were confirmed dead by the Medical Officer on duty.

Their bodies have been deposited at the mortuary for preservation, identification and autopsy. 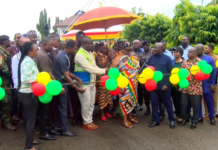