The Member of Parliament (MP)/ Minister for Special Development Initiatives, Mrs Mavis Hawa Koomson of Awutu Senya East Constituency, who is known as Obaatanpa, has touched the hearts of Private School Proprietors and their teachers.

She has presented food items worth GH₵90,000.00 as support in the fight against COVID-19.

The items included rice, cooking oil and tomato paste to be distributed among the schools and to be given to their teachers.

The MP, speaking at Christ Apostolic Church, Kasoa New Town where the presentation was done, said she was touched when the Association wrote to her office for support.

She said she was also touched after subsequent meetings with teachers and school owners, hence the support.

She advised them to adhere to the practices of washing hands thoroughly with soap under running water, the use of hand sanitisers and wearing of nose mask at all the times, with the hope that, “we will surely overcome together as a nation in no time.”

On behalf of the Association, the Chairman, Rev. William Baako, was full of praise for the MP and described her as a good mother with a heart of gold.

Rev. Baako acknowledged the countless support the Association had received from her and entreated the Association members and teachers to replicate her good gesture in these trying times.

He assured her that they will support her come December, 2020, and beyond. He also thanked the government for the provision of soft loan to Small and Medium-sized Enterprises and pleaded that the Association should also be considered in these times.

With the MP’s entourage were the Central Regional Women’s Organiser, Miss Charlotte Adwoa Antwi and the constituency executives. 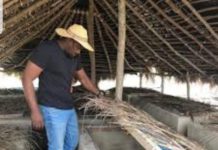