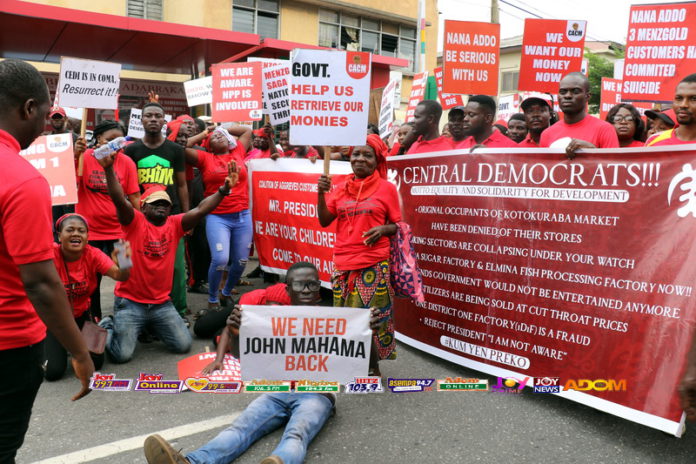 Capt Effah-Dartey has described the protest as a failed one because under the New of the numerous social interventions by the government including Free SHS, allowances for Nursing and Training college students and more.

He said the National Democratic Congress (NDC) used the protest to solicit for funds and contracts from Ministers.

The seasoned lawyer said he was shocked when he saw members of the NDC demonstrating and claiming the economy was hard.

“When they say ‘Kum yen Preko’, who should kill them,” he asked.

“I think they are just some hungry people who only wanted to roam and beg for money and seek contracts from ministers,” he claimed on Accra-based Okay FM monitored by Adomonline.com.

The ‘Kum Yen Preko’ protest march, according to organisers – the Coalition for Social Justice (CSJ) – was a demonstration against economic hardship under the current government.

But Capt Nkrabea Effah-Dartey said the demonstration by the Coalition for Social Justice is a mere float that failed to get the needed attention.

Speaking on the insecurity claims by the coalition, Captain Effah-Dartey said Ghana was the safest country, saying he wondered why the coalition would say otherwise.

“All the points they raised are neither here nor there. How many journalists have been beaten by soldiers or government officials, is it a daily occurrence or once in blue moon? I sometimes struggle to understand their claims,” he noted.