Leader of the Minority Caucus in Parliament, Haruna Iddrisu, has criticised the current government for comparing its economic performance to that of the John Mahama-led administration.

READ THIS: Smart tips and tricks to make your man do anything you want!

The legislator made the comments during a deliberation on the 2020 budget by the House on Tuesday, November 26, 2019.

Mr Iddrisu advised the Akufo-Addo-led government not to compare its economic performance to the previous government as the current government has more resources at its disposal than the National Democratic Congress government did.

SEE THIS: Why I broke up with David Dontoh – Maame Dokono

“You want to compare your performance to John Mahama? At the end of 2016 oil revenue for John Mahama was between $ 218 million dollars and $ 316 million dollars. You (NPP) have $ 1.1 billion dollars, to whom much is given much is expected and so you should be doing more,” he said.

The Member of Parliament for Tamale South further blamed the New Patriotic Party (NPP) government for depleting the country’s international reserves which stood at $ 9.95 billion dollars in April 2019 to $ 8 billion dollars in October 2019. 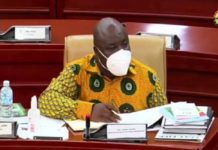 Why vetting was disrupted today