Deputy General Secretary of the New Patriotic Party, Nana Obiri Boahen says Daniel Asiedu, the man facing trial for the murder of late Member of Parliament (MP) for Abuakwa North J. B. Dankwa-Adu, may be high on some drugs for asking him to come clean on the lawmaker’s death.

In a dramatic turn of events in court Thursday, the accused person, who was not allowed to speak in court to Obiri Boahen after proceedings that he knew what caused the death of the late MP, challenging him to come out and speak.

Asiedu also threatened to take the matter to the International Criminal Court to seek justice.

Meanwhile, Magistrate, Ms Arit Nsemoh, DSP Goerge Amega, the prosecutor in the case, Nana Obiri Boahen, all bemoaned the delay being suffered by the case.

Nana Obiri Boahen has specifically blamed the police for intentionally delaying the matter.

Obiri-Boahen said on Accra-based Neat FM monitored by Adomonline.com said he was frustrated by the intentional delays caused by the police.

Reacting to the allegation of the accused person, he said he wasn’t worried at all, saying the accused should not be taken seriously. 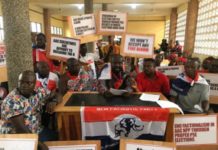