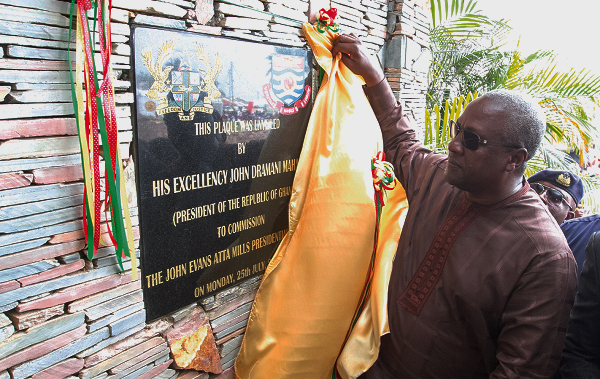 Member of Parliament for Tema East, Daniel Nii Kwatei Titus-Glover claims the decision to stall the project by the Mahama administration was borne out of hatred for the late Atta Mills.

“Professor Mills had the opportunity to pick any other person to be his running mate; he faced the odds and picked you John Mahama as running mate and you pay him back this way? It’s a shame for John Mahama,” he fumed.

The library in memory of late Mills was commissioned by former President Mahama in July 24, 2016, but is still under lock and key because government still owes the contractor.

The library has a 100-seater capacity auditorium, a 45-seater multimedia centre, seminar rooms and a museum which contains historical materials reflecting his life and works.

But, the project is now a ‘white elephant’ as plans to make it a reference centre for knowledge in economics, politics, education and law have not materialised.

“The sacrifices late Mills made for his party, if you [Mahama] could not build simple library to honour him, how can you rule Ghana?” he quizzed.

READ: ‘Side chicks’ must be allowed in Black Stars camp for morale- Mzbel

The Tema East MP said the Akufo-Addo government cannot be blamed for the current state of the library since no handing over note was left to enable them continue the project.

This notwithstanding, he appealed to the Minister of Education, Dr Mathew Opoku-Prempeh to take up the project and ensure its completion.

“Professor Mills has paid his dues and was a good friend of President Akufo-Addo so it will be a great honour for the library to be completed in his tenure,” Mr Titus-Glover added.