To commemorate the day, the Odomna family from his maternal side at Ekumfi, led by the head, Nana Kobina Biney, visited his grave at the Asomdwee Park in Accra.

It was a solemn event characterised by hymns, a minute’s silence observance, the laying of wreaths, and both Christian and Muslim prayers for the soul of the late statesman.

This comes on the back of a ceremony held on July 24 to mark a decade of his passing at the same venue.

However, this new ceremony, according to the family, is because they remember a deceased on the date of his burial, not death.

Founder of the Atta Mills Institute and former aide to the late statesman, Samuel Koku Anyidoho was also present.

Mr Anyidoho took to his Twitter page to share a video which captured some activities that took place as part of the visit. 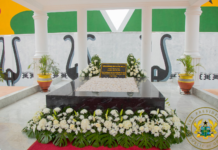