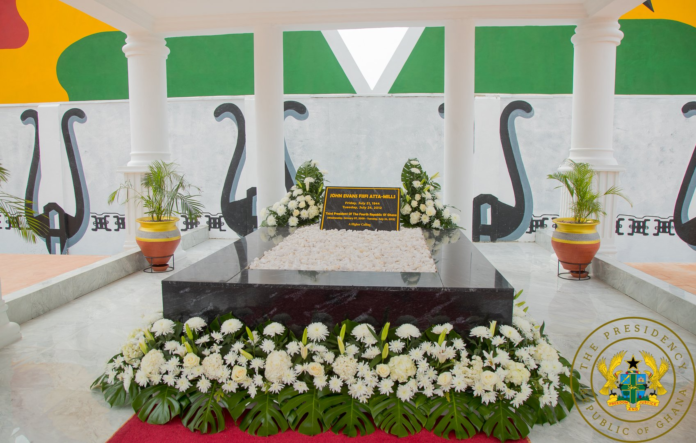 The Odomna Family of former President Professor John Evans Atta Mills of Ekumfi Otuam and other parts of the Central Region have expressed appreciation to the President for refurbishing the Asomdwee Park.

“We appreciate your work and we say ‘ayekoo’,” the Head of the Odomna Family, Nana Kobina Biney, said on behalf of the family during a ceremony to mark the 10th anniversary of the death of the former President at the park yesterday.

The family, from the maternal side of the late President, was at the park to perform customary rites for their departed kinsman.

The rites are performed on the 10th anniversary of a departed member of the family.

The solemn event was characterised by hymns, a minute’s silence observance, laying of a wreath, and both Christian and Muslim prayers for the soul of Prof. Mills.

The family was joined by the Founder of the Atta Mills Institute, Koku Anyidoho, who was the spokesperson of the then President.

To mark the 10th anniversary of his passing, the government held a memorial and thanksgiving service which was also used to inaugurate and consecrate the refurbished Asomdwe Park on July 24, 2022.

Leading the family to perform the rites, Nana Kobina Biney also acknowledged the “yeoman’s work done by Koku Anyidoho and his organisation, the Atta Mills Institute.

“The Odomna Family is also here this morning to assure our son that dead or alive, we still love him,” he stated.

He, however, said the family had planned to invite Mr Anyidoho to Ekumfi Otuam to thrash out some outstanding matters related to the refurbishment of the late President’s tomb without their involvement.

“We have heard his apology already in the media, and he has accepted his wrongdoing. But Mr Anyidoho should have informed the family about the refurbishment of the Asomdwee Park for us to delegate a representative,” he said.

Nana Enyinfua said prior to his death, President Atta Mills introduced Mr Anyidoho to the family at Ekumfi Otuam, leading to hIM being accepted as a member of the family.

“I want to reiterate that Mr Anyidoho should not turn his back on the Odomna Family, much the same way we will not turn our backs on him since he is now a son of our family,” she said.