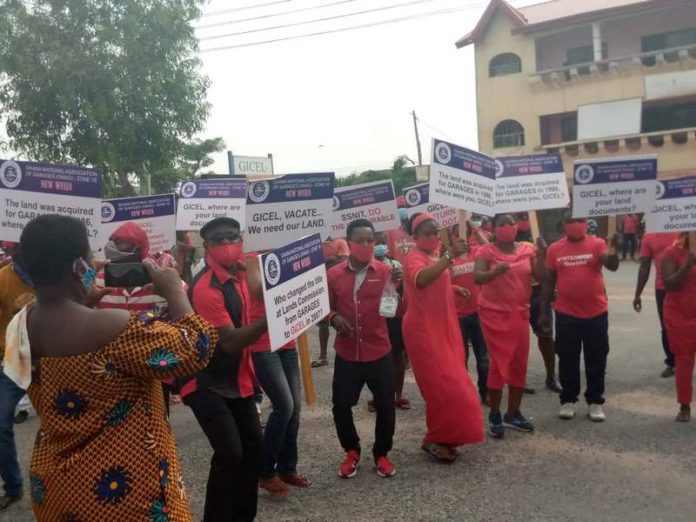 The Ghana National Association of Garages (GNAG) is demanding the immediate transfer of their New Weija lands from SSNIT to them.

The Association has said the property being managed by Ghana Industrial and Commercial Estate Limited (GICEL), was given to them in 1986 by then President, Ft. Lt. Jerry John Rawlings.

The allocation, according to them, was done when Mr Rawlings decided to relocate the Garages as part of preparations to pave the way for a Non Allied Movement (NAM) conference.

Addressing the media recently, a board member of the GNAG, Robbinson Martey, said an Executive Instrument to that effect was issued by President Rawlings.

Giving further details, Mr. Martey stated however that in 1992 government and Social Security and National Insurance Trust (SSNIT) had a Build, Operate and Transfer (BOT) agreement for SSNIT to develop the land for a number of years.

According to him, SSNIT then established GICEL to manage the area and collect revenue on its behalf till they recouped what was used to finance its development.

According to them, even some toilet facilities in GICEL have been sold for other purposes and the ugly face of open defecation is likely to emerge in the estate.

The Garages Association also alleged that SSNIT has fraudulently changed ownership of the facility into its name, on the blind side of the Garages.

Mr Martey, on behalf of the GNAG, therefore demanded the immediate transfer of the facility to the Association of Garages.

The GNAG, has therefore petitioned Chairman of the SSNIT Board, Dr Kwame Addo Kufuor, the Administrator of Lands Commission and the Chief of Staff at the office of the President, to plead with them to ensure that SSNIT transfers the GICEL lands at New Weija to Association of Garages.