The New Patriotic Party (NPP) in the Assin North Constituency has debunked reports suggesting a thanksgiving service over the Supreme Court ruling against James Gyakye Quayson.

According to the constituency secretary, Stephen Asamoah, the photos in circulation are old photos.

They included Pentecost, Methodist, Church of Christ, Presbyterian Church among others to thank God for the Supreme Court ruling against the Assin North MP.

Among the entourage was said to be the General Secretary of the NPP, John Boadu, who led a delegation from the party headquarters, the Constituency Chairman, and all other executives.

Some residents, who were angered by the reports, vowed to re-elect the MP should a by-election be held in the area as they are impressed with the performance of the MP so far.

But addressing a press conference at Assin Breku, Mr Asamoah explained the photos were captured in October 2021 during the thanksgiving service of the Assin Fosu MCE, Nicholas Fiifi Baako on his confirmation for the second term.

“The Assin North NPP leadership and the DCE haven’t organised any thanksgiving service to celebrate the Supreme Court ruling against Mr Quayson as speculated on social media and mainstream media,” he stated.

Meanwhile, Mr Andoh is said to have come under a lot of criticisms from members of the NDC at Assin North over the purported report. 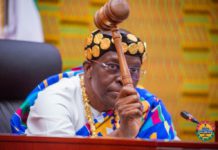