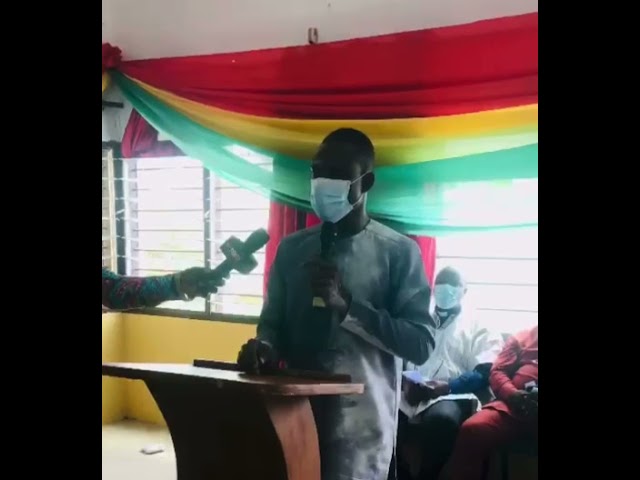 The District Chief Executive (DCE) nominee of the Asikuma Odoben Brakwa district, Lawrence Edutuah-Asiaw, broke down while giving a speech following his election.

At a session held to confirm him the elected nominee, Mr Edutuah-Asiaw was sworn into office by the District Magistrate.

Delivering an emotional Thank You message, his lines touched the soft spot of others who shed tears in the auditorium.

In the speech he said: “I took notice of a message circulating on several social media platforms purporting that my mother is a beggar and for that matter, I don’t deserve this position.

“Many were unhappy with the message but, I am rather inspired by that message. If a beggar’s son can be elevated by God to this level then indeed, there is nothing impossible for the Lord.”

He then emphasised that there are a lot of people who by one way or the other have been less-privileged and those people are the reason why the favour of the Lord found him.

Mr Edutuah-Asiaw was elected after a unanimous vote by all 46 assembly members.

Present at the session were the Regional Minister, Mrs Justina Marigold Assan, some of the Central Regional New Patriotic Party leadership led by Chairman Robert Kutin Jr., representative of the Breman Traditional Council, the District Magistrate, the District Coordinating Director and host of others.