In the book titled ‘Working with Rawlings’, the former Local Government Minister, Prof Ahwoi, among other things, chronicled his dealings with former President Jerry Rawlings who gained access to power through a coup but subsequently handed over power peacefully.

Contrary to views that the timing for the book’s release is wrong and will have a dire effect on the NDC, especially in the December polls, Mr Nketia was of the opinion that the NDC will not be affected.

“I don’t see how what somebody has written as his personal account and experience with the founder of our party would generate this amount of controversy and even if that controversy is raging, I don’t see how it comes to affect our elections,” he said on Accra-based Citi TV.

To Mr Nketia, the book is only a chronicle of Prof Ahwoi’s personal experience with individuals of the party and not the NDC at large.

“So they are free to do what they choose to do outside the party’s main strategy for elections. I don’t want to be the policeman in the affairs of everybody within the party because I cannot be that policeman,” he stressed.

He said there is no need for the contents of the book to cause the controversy it has, especially among party members.

“Who said people don’t attack each other in all parties? If it is about issues relating to the party, fine but if it is about personal issues, I don’t see how it comes to affect our campaign at all,” he bemoaned. 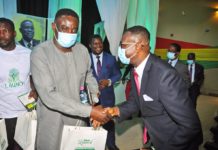