A student at Ashesi University has developed a transit application to streamline travel on Ghana’s chaotic minibus transportation services, referred to locally as trotrto.
Andrew Abbeyquaye’s Capstone Project will enable users obtain and plan their travel itinerary within Accra while minimising travel distance and time.
According to information on the renowned private university’s website, Andrew used data on popular routes travelled by trotros to build the app.
“I heard that the data was out and I’ve been quite interested in areas where transportation service in Ghana could be improved.
“However Google Maps doesn’t allow individuals to insert data into their transit system, so I had to build my own While still using their Maps API to visualise my results,” Andrew was quoted on the school’s website.
Andrew said he was inspired by the potential of his project to improve the way people travel in Accra.

Andrew Abbeyquaye is a senior at Ashesi University
According to the World Bank, over 70% of commuters in Accra depend on trotro, yet several passengers remain unaware of the most efficient routes for their regular commute.
The trotro system in Ghana is mostly unplanned. Although there are stations and bus stops, for most people, especially strangers to Accra’s bustling roads, it can be an overwhelming experience trying to get where they need to in the shortest possible time, with minimal bus changes and in a cost-effective way.
“I had other exciting ideas that would rely on next-gen technology, however, I realised that they would most likely serve only the 1% who could afford the technology,” Andrew explains. 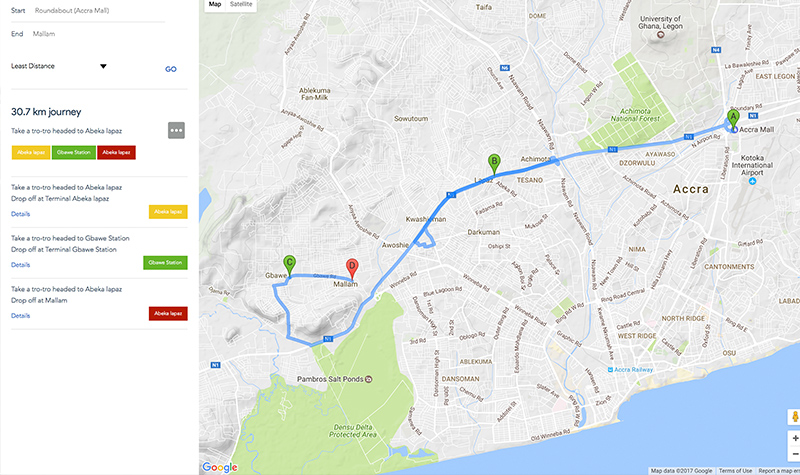 Screenshot of travel itinerary showing what bus to get on and where to change buses
In most developing countries, technologies such as Google Transit are available to provide commuters the most efficient route, saving them both time and money.
Such functionality depends, however, on data, but data on trotro routes was unavailable when such technologies were introduced in Ghana.
Years later, even though the data is now available, it has yet to be used to fill this informational gap either by integrating it with an existing application or incorporating it in a new one.