The Ashanti Regional Minister, Simon Osei-Mensah has made a cash donation to Kumasi Asante Kotoko after the team’s fatal accident.
The Minister gave the team GHC10, 000 when he visited those injured at the Komfo Anokye Teaching hospital in the Ashanti Regional capital, Kumasi.
Asante Kotoko were returning from Accra following a defeat against Inter Allies on match day 22 of the Ghana Premier League on Wednesday, but unfortunately their bus ran into a stationery truck with registration number AS 7329-13.
The accident claimed the life of the deputy Equipment Officer of the club, Kofi Asare and several others sustained various degree of injuries.
The incident has shocked management of the team and the football fraternity who have since extended their condolences to the bereave family.
Speaking on Asempa FM’s Ekosii Sen programme Thursday, Hon. Simon Osei-Mensah expressed shock at the incident.
He said he together with his deputy, Elizabeth Agyemang quickly rushed to the scene when they were inform about the accident.
“I nearly wept when I saw the driver who could hardly move. It is really sad” he bemoaned.
Osei-Mensah also indicated that the players and officials who sustained minor injuries have all been treated and discharged.
He said the accident should be a wake-up call to the police to ensure drivers adhere to the traffic regulations.
The Ashanti Regional Minister urged the players to put themselves together and thank God for saving their lives.
He also revealed that, they will pay the medical bills for those injured until they recover.
Mr. Osei-Mensah called on the police to expedite action on investigation for the real cause of the accident. 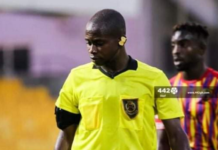