Slated for 3:pm, the interview with Dr Bawumia is expected to cover all areas of national interest including highlighting various interventions and policies already rolled out by the governing New Patriotic Party (NPP).

With some 68 days left to the December 7 polls, the Vice President will also use the platform to outline new promises made in the party’s 2020 manifestos.

The interview with host Philip Osei Bonsu, who is popularly called OB, forms part of the Vice President’s Greater Accra Regional tour which was started yesterday.

Listeners are encouraged to send in questions and contributions via all Multimedia Group Limited’s social media handles. 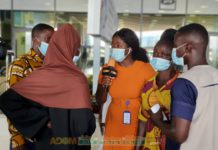