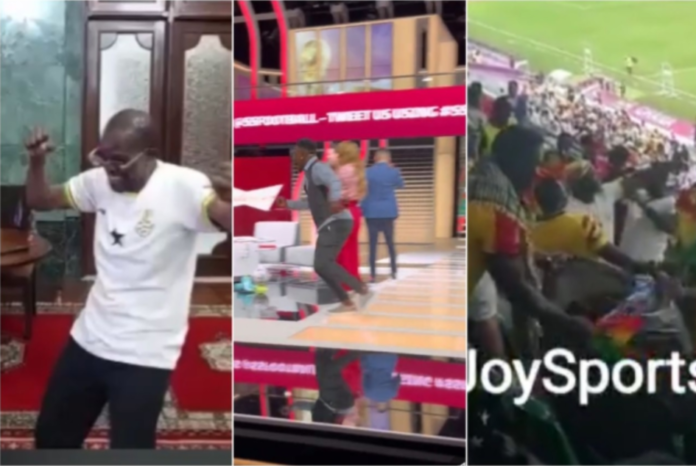 It was the much-needed win for Ghanaians who were largely sitting on tenterhooks for the final quarter of the game.

And from the reactions, after the South Koreans netted a quickfire double between the 58th and 61st minutes, something had to definitely give.

Kudus rose to the occasion, found himself on the end of a Gideon Mensah cross and curled the ball past the goalkeeper to restore Ghana’s lead and eventually sealed the game for Black Stars.

The 68th-minute winner triggered a thunderous celebration across the country and on social media.

Despite late attempts from the Koreans, the game ended 3-2 with Ghana earning a vital win in Group H.

The jubilation started right from Ghana’s legislative arm where the Speaker, Alban Bagbin was caught on camera dancing to one of the goals on the day from his office.

The ecstatic Speaker punched the air while clad in his Black Star jersey in the company of other officials in the House.

However, the ethics of being on a live set could not suppress his excitement when the deciding goal was scored.

Filled with elated, the former skipper run out of the set in jubilation shouting atop his voice.

Now, supporters of Japan’s national team have been earning praise in Qatar for their zeal toward cleanliness after each game.

This win seems to have presented Ghanaian fans with the opportunity to emulate this off-pitch tradition.

While many celebrated the win at full-time, other fans were seen moving boxes around to collect the waste left by their colleagues.

Another interesting sight came from an official from the Ghana dressing room posing for a selfie.

The subject Son Heung-min was almost in tears after his team lost at full time.

Otto Addo’s side will now face Uruguay in their last game looking to secure qualification to the next stage of the competition.