The National Ambulance Service has dismissed reports of abandoning some vehicles in an unidentified location.

A widely circulated video on social media captured a number of ambulances parked in a location with a voice-over alleging that they have been abandoned.

But the service, in a statement signed by the Director, Public Relations, Simmons Yussif Kewura, identified the location as the Ashanti Regional workshop in Kumasi.

According to the statement, it is the designated workshop for ambulances in the middle and Nothern sectors where routine servicing, maintenance, and repairs take place.

The statement explained the ambulances were due for such purposes, hence the reason they have been parked there.

The outfit stressed none of the ambulances have been parked at the workshop for more than two months, adding efforts were underway to get them back on the road. 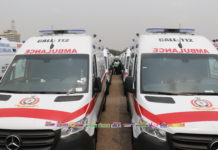