The flagbearer of the National Democratic Congress (NDC), John Mahama has accused the Akufo-Addo government of pushing the country into debt distress.

Speaking on Woezor TV Thursday, he cautioned that the indiscriminate borrowing of the incumbent government could make Ghana a Heavily Indebted Poor Country (HIPC) again.

This, he said, is unacceptable since the nation has come a long way to be economically stable after moving out of HIPC.

“But be that as it may, our debt to GDP has gone up, luckily we [NDC] rebased the economy so you do not see the impact. But if you look at it by the time Nana Akufo-Addo leaves office, our debt to GDP should be going to somewhere closer to 80%.

“Debt distress is what we are facing now, even the World Bank and IMF have all been ringing the bells that we are getting close to becoming a HIPC again,” he said.

According to the latest Summary of Macroeconomic and Financial Data Ghana’s total public debt stock has jumped by 1.66 per cent to hit ¢263.1 billion in July 2020.

But, Vice President Dr Mahamudu Bawumia has defended government’s borrowing noting that there is a lot to show for the money taken.

In an interview on Asempa FM’s Ekosissen Tuesday, Dr Bawumia explained that due to the Covid-19 pandemic, government had to seek financial assistance to cushion Ghanaians who were badly hit by the health crisis.

SARS brutality: ‘Akufo-Addo’s silence is for a good reason’ [Listen] 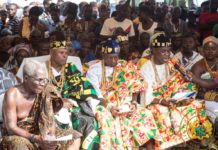