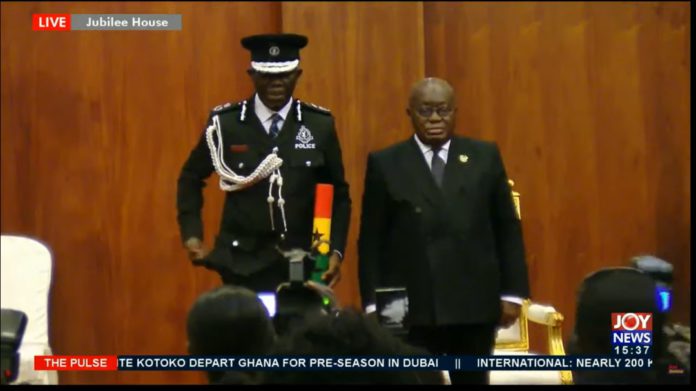 This was at a short ceremony at the Jubilee House on Friday, October 8, 2021.

The ceremony was graced by Vice President Dr Mahamudu Bawumia, top officials from the Police Service, and other high-profile personalities.

The President speaking at the ceremony charged Dr Dampare to establish a service that will win the confidence of the public.

“The public is the police and the police the public so the citizenry will only have confidence when its members are seen to enforce the law without fear or favour,” he urged.

On his part, COP Dr Dampare expressed appreciation to the President for the honour done him and pledged commitment to deliver on his mandate.

“I thank you for this rare opportunity to serve my country in this capacity. I came to this service in humility and integrity and will hold on to these principles.

“The service will become a world-class though not an easy road but I assure you we will soon become a reference point in Africa,” he stated.

COP Dr Dampare was appointed as Acting IGP effective from August 1, 2021, to replace James Oppong-Boanuh who was due for retirement.

Dr Dampare is now the 23rd IGP of the country and the youngest since independence.

With about 30 years of active service, he has risen from the rank of constable to the current portfolio.

The President, speaking at the 50th Cadet Officers Graduation Ceremony held at the National Police Training School in Accra, last week Friday, expressed satisfaction with his work done so far.

According to him, the recent actions taken by the police administration to tackle security challenges in the country are commendable and have received the support of many Ghanaians.