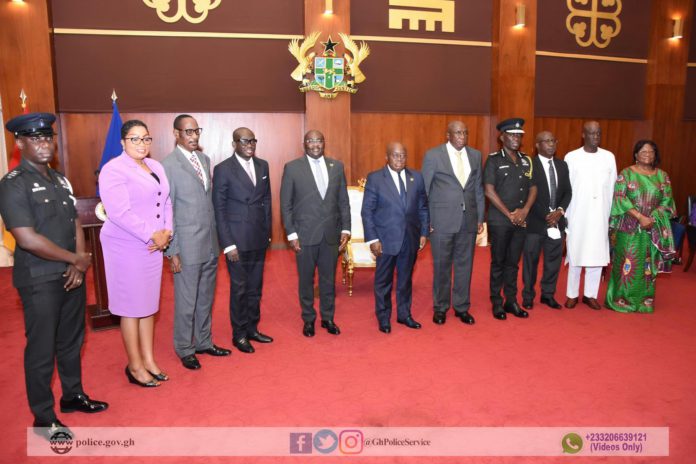 President Nana Akufo-Addo, on Tuesday, inaugurated the Police Council at the Jubilee House in Accra.

The Vice President Dr Mahamudu Bawumia is the Chairman.

In his address, the President charged the newly sworn-in members of the Police Council to steer the service to become an accountable, responsive, and professional institution.

He also tasked them to execute their mandate for the benefit of all Ghanaians and to ensure the peace and security of the country.

The Chairman, Dr Bawumia in his response, expressed the gratitude of the council members to the President for the confidence reposed in them.

He noted that members were aware of the task ahead considering the sophisticated and changing nature of the crime.

Dr Bawumia gave the assurance that with dedication, hard work, and selflessness, members of the council will work to redeem the name of the Ghana Police Service and make it one of the best police organisations in the world.

The event was attended by some members of the Police Management Board and other dignitaries.

The Police Council is the highest oversight body of the Ghana Police Service, mandated by the 1992 Constitution of Ghana to advise the President on policy issues relating to internal security and provide strategic direction for the operational and administrative effectiveness of the Service.