The Akuapem traditional council has confirmed that the 2022 Odwira festival will take place amid uneasy calm at Okaupeman.

According to media reports, the festival which was launched Friday, July 24 in Accra was subsequently cancelled due to litigation on the legitimacy of Okuapehene, Oseadeeyo Kwasi Akuffo III, pending before the national house of chiefs.

The council in a release has dismissed the reports, reiterating that the festival will go through as planned.

However, the festival, unlike usual will exclude all activities that usually occur on Friday of the festival with reference to the Grand Durbar due to reasons that have not been made known publicly.

The festival will come off on September 12 and climax on the 18th of the same month.

“We are hereby stressing again that Odwira is not cancelled and cannot be cancelled by anyone as it is over a century old tradition of the Akuapems. However, the Akuapem traditional council has reasoned unanimously to do away with the Grand Durbar that climaxes the festivities this year.

“Please take notice once again that the 2022 Akuapem Odwira festival will commence in September starting on the 12th through 18th at Akropong then all other surrounding towns will follow with their celebration,” part of the release read. 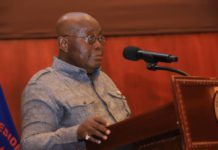 I want peace in Okuapeman – Akufo-Addo