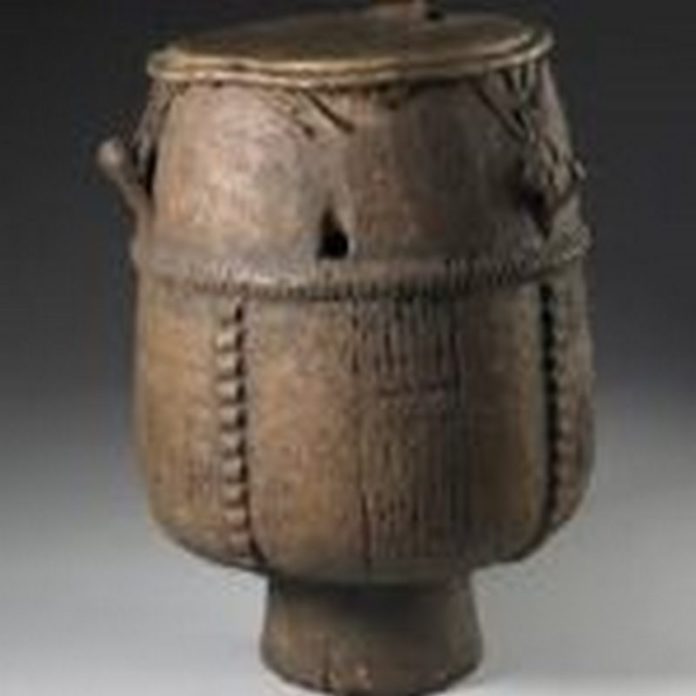 The Akan drum is the oldest African-American object in the British Museum, brought from West Africa to the Colony of Virginia as part of the slave trade around 1735.

‘Akan’ refers to an ethnic group from West Africa. Its culture is most apparent today in Ghana.

The Akan drum was acquired by Sir Hans Sloane, whose collection formed the basis of the British Museum when it was founded in 1753.

Broadcaster, playwright, and British Museum Trustee, Bonnie Greer, has been involved in the creation of the display, which focuses on two main themes – the Transatlantic Slave Trade and the origins of African-American music.

“First of all it is the oldest African-American object in existence,” the trustee said. “It is an ancestor in a way that African peoples understand ancestors because it made their crossing,” the trustee.

The first part of the display describes the journey of the drum from Ghana to the Colony of Virginia, relating the suffering and displacement of peoples as a result of the Transatlantic Slave Trade.

This journey would have typically included the practice of ‘dancing the slaves’, where enslaved Africans were forcibly exercised on board the slave ships, a practice in which it is likely this drum would have played a part.

The trustee said that the drum was probably used for the so-called ‘Dance of the slaves’. “It is very difficult for us now to take on board now that these people, who were stolen and sold on the West Coast of Africa, were basically merchandise, they were like horses or fine cars, and you had to keep them moving so if you can imagine people being underground on a ship,” the trustee added.

A grotty little wooden ship on a terrible Atlantic journey, having to be brought upstairs to get some fresh air, not to be depressed, to fight disease, because the minute they got off the ship in Virginia they would have been put in a holding pen and then put up to be sold.

So this drum enabled them to remember, to hold on to some kind of connection with the old country.

Devorah Romanek, the curator of the North American Collections at the museum said the knowledge about the slave trade is especially very important because “… the history is very painful and people should know it to understand their contemporary existence in terms of the trans-Atlantic slave trade but it’s also something to be celebrated and people should understand that and sort of make their connection that history can be like that, can be incredibly painful and really also something to celebrate.”

The Akan drum is made of wood (Cordia and Baphia varieties, both native to Africa), vegetable fibre and deer-skin. The drum today symbolises the importance of music in African-America, both now and at the time of the slave trade.