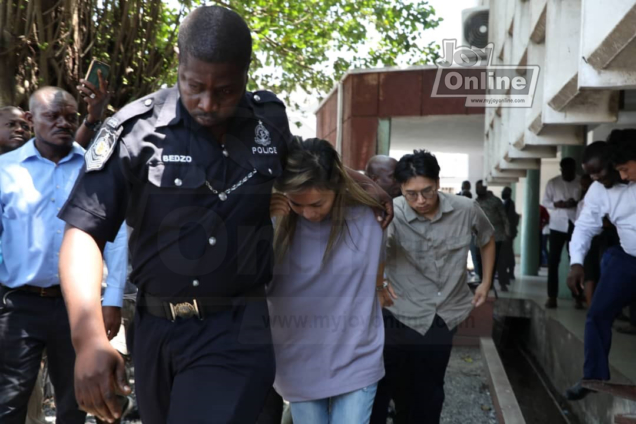 An Accra High Court has ordered that the “son” of Aisha Huang and one other person be committed to the Nsawam Medium Security Prison as the criminal proceedings in their case commence.

According to the court, the accused persons, who are foreign nationals, do not have sufficient social and economic ties within the jurisdiction of the country and are at high risk of fleeing.

The court indicated on Thursday, November 24, 2022, that it would be in the interest of justice if the two were handed over to the relevant custody to keep tabs on them.

He thus made the order directed at the Ghana Prisons Service to take charge of the accused and produce them at the court anytime the court needs them.

Huan Lei and Huang Haihua were in court with their interpreter.

Sometimes in August, 2022, the Ghana Security Counsel, the Ghana Immigration Service, and other security agencies received intelligence that the first and second accused persons, Huang Lei and Huang Haihua, together with other foreign nationals, had remained in Ghana without permits and were suspected to be engaged in illegal mining activities.

On September 2, 2022, a team of security officers visited the residence of the accused persons at Ahodwo in Kumasi, where they were arrested. Also found and arrested at the same residence were Jian Li Hau, who is said to be the girlfriend of the first accused person, Huang Haihua. Huang Lei, and one Ruixia Huang also known as En Huang or Aisha Huang, who’s believed to be the mother of the Huang Lei was also arrested.

The team also retrieved from Huang Lei his Chinese passport, and affixed to his passport was a permit issued by the Director of Immigration that authorized the first accused person to remain in Ghana until January 5, 2022. Mr. Lei, upon his arrest and interrogation, admitted he did not have a valid permit to remain in Ghana.

A search conducted in the room of Huang Lei revealed, among other things, eight (8) packs of Eley shotgun cartridges, containing about two hundred and fifty (250) pieces of ammunition. He was not able to provide a valid license for them.

Huang Hiahua, the second accused, had in his possession a Chinese passport bearing his name, and affixed to the said passport was what appeared to be a Republic of Ghana residence permit purportedly issued by the Director of Immigration for a one-year period with effect from May 26, 2022. However, investigations revealed that the supposed permit was not issued with the consent or authority of the Ghana Immigration Service.

He argued that the prosecution for the past two months has used the same tactics, giving the accused persons charges that they themselves knew were untrue.

He said the prosecution charged the accused with mining-related charges and eventually withdrew them. He said what they have still brought in court has traces of mining-related issues in them, and they intend to deal with all of that when they appear before them again.

The court ordered the prosecution to file their disclosures and serve them on the defense on or before the next adjourned date, December 13, 2022.

Justice Lydia Osei Marfo said in view of Section 53 of the Immigration Act 2000, Act 573, and as far as count one is concerned, the defense may as well file their relevant documents and serve the same on the prosecution.