Minister-Designate for Health, Kwaku Agyeman-Manu, wants levies and premiums on the National Health Insurance Scheme (NHIS) to be increased to ensure its sustainability.

According to him, premiums on health insurance have remained the same despite the changes in the cost of healthcare in the country.

The Dormaa West Member of Parliament made the call when he appeared before the Appointments Committee of Parliament.

He stressed the increase will also help the ministry have resources to meet their reimbursable expenditures from the facilities.

“If we don’t find a way to bring in some extra resources, either through increments in premiums or through more government resource allocation to support the scheme, going forward we may not continue to see its efficient performance as it is,” he said.

He bemoaned the increment if not considered will continue to result in arrears to facilities.

“It is likely we may go back to the same old problem of accumulating arrears that will hamper the efficient performance of the health insurance scheme,” he urged.

The scheme was set up to fund the healthcare of Ghanaians and generates its cash inflow from the 2.5 per cent levy collected under the Value Added Tax.

NHIS: If you paid for any of these, it’s a violation of your membership rights 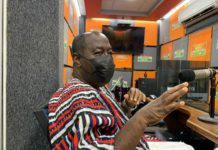 Corruption Watch: Exposé in ‘Pay or Die documentary’ a tip of the iceberg – Public Health expert