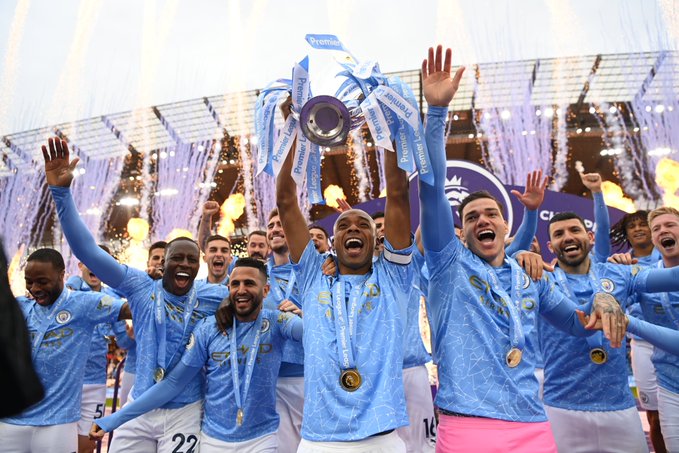 Sergio Aguero marked his final appearance at Etihad Stadium with two goals as the new Premier League champions ended their domestic campaign with a thumping win over Everton.

Aguero, who has won five league titles during a glorious decade with City, was not fit enough to start but, with his side already 3-0 up he quickly made his mark after coming off the bench with 25 minutes to go.

The 32-year-old Argentina striker scored his 259th goal for the club with a clever curling shot with the outside of his foot, then headed home Fernandinho’s cross a few moments later.

Only a smart Jordan Pickford block stopped Aguero from completing his hat-trick, the only blip on a memorable day for Pep Guardiola’s side and their fans.

There were City supporters inside their stadium for the first time this season, and they were able to enjoy a dominant performance from start to finish, topped by Aguero’s farewell goals.

Kevin de Bruyne fired City ahead from the edge of the area after only 11 minutes, then set up Gabriel Jesus to gallop clear and make it 2-0.

Gylfi Sigurdsson had a penalty saved by City keeper Ederson before the home side made sure of the points thanks to a cool finish by Phil Foden after good work by Raheem Sterling and Jesus.

The crowd had already been demanding Aguero’s introduction for most of the match and, when they got their wish, the club’s record goalscorer did not disappoint.