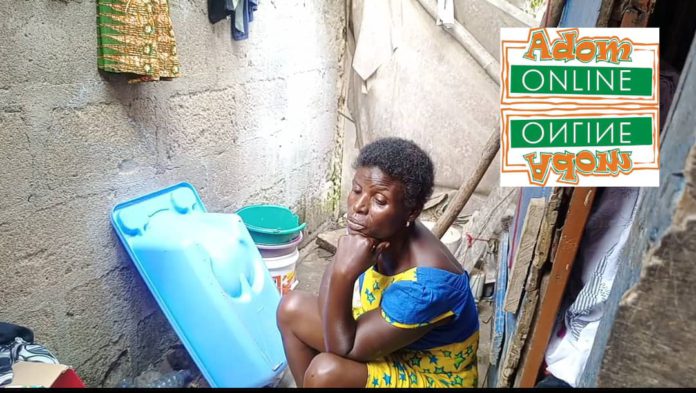 Smile is beaming on the face of Gladys Koomson, a mother of four, whose husband impregnated two of her daughters in a kiosk at Kasoa SCC in the Weija Gbawe Municipality, as she finally gets help.

The older girl has given birth to a six-month-old baby boy, while the 13-year-old is six months pregnant.

According to the girls, when their stepfather was having bouts of sex with them he warned them not to inform anyone, else they’ll die, hence out of fear, they decided not to inform their mother about the predicament.

The mother of the girls, in an interview, explained that she sells pure water, hence she was always away from home.

She said her absence gave her husband, who is a bread baker, the chance to have sex with them whenever he returned from work.

Madam Koomson, after the unfortunate incident, said life had become tough for her to feed, cloth, school and shelter the children, who sleep in a kiosk and on a floor mat that gets soaked when it rains.

She, therefore, with the help of Adom FM appealed to Ghanaians for help.

Help has finally come as the woman and the children have now relocated to a fully furnished chamber and hall self-contained apartment at Ofaakor.

After Adom News’ Kofi Adjei led the campaign to seek for help for the woman on Dwaso Nsem morning show, Ghanaians made contributions totaling GHC13,958.00.

Her room was also furnished in order to ease their burden and the frustrations they have endured for years.

The mother of the victim commended Adom FM, Adom TV and the Multimedia Group, as well as Ghanaians who donated their money to support her.

Asked if she still wants the suspect back, Madam Koomson said: “I don’t need him again in my life, he has put me through a lot and it’s so painful.”

Meanwhile, the suspect has been remanded by the Ofaakor court.