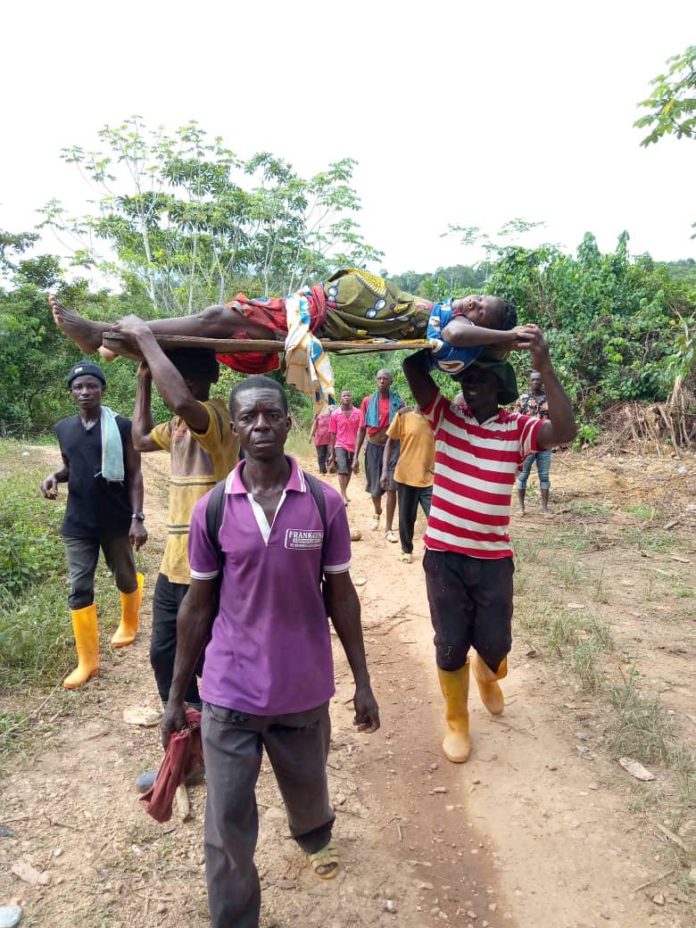 It was a worrying moment when videos of a woman in labour being carried on a wooden door from Abrokyire, a farming community in the Aowin Municipality of the Western North Regio to a nearby clinic at Boinson, went viral.

Subsequently, Adom News paid a visit to the community which is about six miles from the health centre to gather details about the situation.

Relating to the particular health incident, it was revealed residents volunteered to carry the pregnant woman, identified as Hagar Gyamfi, to the clinic, as they have to travel miles to access taxi, and hours more to get to the clinic due to bad road network.

Madam Gyamfi, speaking in Sefwi dialect, recounted how the pain of contraction rendered her immobile, leaving her with no option than to rely on the services of the volunteers.

Her husband also narrated how every passing second of the journey was a nightmare.

Despite the community’s name suggesting ‘overseas states’, residents claim that they are far from comfort, disclosing it is a norm for residents to carry patients on wooden doors or tied to motorbikes to be transported to health facilities.

Aside the heavy weight of patients, volunteers have to travel over river Boin and several others, a situation which most times lead to mortalities on the part of the patients.

Some beneficiaries, who spoke under anonymity to Adom News, said they lived in fear of losing their lives along the way, adding that they will forever be indebted to the volunteers.

Consequently, Abrokyire residents are pleading with the government to divert attention to their municipality and improve their standard of living.

Meanwhile, the woman successfully gave birth to a bouncy baby boy and has since been discharged.