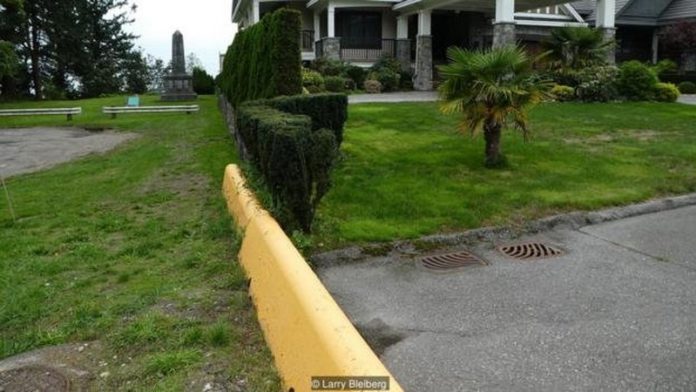 Traffic moves easily on 56th Street, a leafy roadway in suburban Vancouver, Canada, until a maze of concrete barriers abruptly disrupts the flow.

I steered my rental car through the obstacles and pulled up to a kiosk, where a US border guard scanned my US passport. I told him I’d just arrived from the other side of the continent, and he turned to address me out of what seemed to be genuine concern.

“Do you know where you’re going?” he asked, gently suggesting that I might be lost. Visitors from outside the region rarely wander into Point Roberts.

But that’s precisely why I’d come: to see a five-square-mile smudge of the United States that’s attached to Canada, but physically separated from the rest of the US. The geographic rarity is essentially a gated community guarded by the US Department of Homeland Security.

Its presence shows how a seemingly simple diplomatic agreement can have profound implications on daily life centuries later. When the US-Canada border was set at the 49th parallel north in 1846, it intersected a Canadian peninsula, leaving a sliver of the United States at its bottom tip, about 25 miles south of Vancouver. Geographers call it a “pene-exclave”, an area of one country that in practical terms can only be reached by passing through another country. Except for the few who arrive by private plane or boat, everyone coming to this American community drives in from Canada.

Local historian Mark Swenson says Point Roberts wasn’t an oversight. Keeping the property granted the US valuable fishing and crabbing rights, he said, and a strategic Pacific Northwest foothold. For decades, the outpost was held as a military reserve, but in 1908 the United States granted the land to settlers, who were mainly Icelandic immigrants. More than 30 years ago, Iceland’s president honoured the pioneers, dedicating a monument at the community’s oldest cemetery.

Today, Point Roberts is a forested rural community, home to almost 1,300 full-time residents, hundreds of bald eagles and a few pods of killer whales who summer here. It’s a place with a flashing traffic light, a few shops and little else.

Residents arriving from the booming Vancouver metro area, where the population is pushing 2.5 million, say they start to relax the moment they cross into this part of the United States. “We call it the Point Roberts sigh,” said Pat Grubb, who with his wife publishes the local newspaper, the All Point Bulletin.

Indeed, with all the focus on the security of the US’ southern border with Mexico, life appears laidback on this boundary with Canada. Driving Point Roberts’ northernmost street, Roosevelt Way, the international border is little more than a drainage ditch backing up to neatly trimmed hedges, planted to preserve Canadian homeowners’ backyard privacy, not their national sovereignty. Elsewhere, swing sets and football goalposts snuggle the boundary. The closest thing to a border wall is a shin-high concrete barrier marking the dead end of a neighbourhood road in the adjoining Canadian town of Tsawwassen.

But things may not be as placid as they seem.

A persistent rumour describes Point Roberts as a popular resettlement site for the US Federal Witness Protection Program, an initiative to assist informants who testify against criminals. Folklore says dozens of people have been given new identities and relocated here. In 2012, Atlantic.com’s City Lab suggested that 50 residents could be in the program.

After all, anyone who arrives by car from the rest of the US must pass through two international border stations: one to enter Canada, and a second to re-enter the United States at Point Roberts. And Canada has especially strict regulations prohibiting entry to people with criminal histories, providing additional safeguards.

Tracy Evans, assistant general manager at Point Roberts’ Bald Eagle Golf Club, said she believes the story. A few people and incidents have seemed suspicious to her, and some of her neighbours keep completely to themselves. “Think about it. It’s a good place to put someone. It’s a remote location. If you get into trouble in Miami, it would make sense for you to come up here.”

Like many locals, Grubb laughs at the suggestion. But he does say that on a few occasions he’s taken out his camera at a public meeting to snap a picture for publication and had people practically dive out of the way to avoid being photographed.

Even if the tale can’t be confirmed, the town does attract distinct personalities.

“You’ll meet someone, and you’ll say ‘What’s your Point Roberts story?’,” said Swenson, author of Point Roberts Backstory, a local history book. “You have a fun collection of free spirits. You have people into organics, and people who look after the eagles and know them by name. You have people into quilts, you have beekeepers, stamp collectors. Maybe a lot of towns have this, but the fact that we’re all packed into five square miles, it’s more pronounced.”

Geography also creates unusual daily routines. Point Roberts has a primary school, but students past third grade must take a bus to classes in Blaine, Washington, a roundtrip of more than 50 miles that travels into Canada and back into the United States, requiring four border crossings a day. It’s a familiar slog for residents, who make similar trips for doctor’s appointments, or to pick up prescriptions or car license plates.

And then there are the quirks and hassles of living by an international boundary. “There’s a big book of regulations of what can come over the border, and it changes frequently, and it’s your obligation to keep up with it,” Swenson said. “These rules get very, very specific.”

Some seem to defy logic, although they’re meant to protect US agriculture from pests and diseases. Residents aren’t allowed to bring in whole tomatoes, but sliced tomatoes are fine. Since bringing lamb into the United States is highly regulated due to concerns about the introduction of illnesses, pet owners must be careful about the dog food they purchase. During the height of fears about mad cow disease, Point Roberts school children had their lunches confiscated because their parents had packed roast beef sandwiches.

For many, Point Roberts’ appeal is sheer economics. Canadians own summer homes here because waterfront real estate is much cheaper than in the Vancouver area. And there’s steady traffic year-round drawn by lower-priced petrol, milk and alcohol, due to lower US taxes and Canadian management of its dairy production that keeps prices high.

A 2013/14 survey from Western Washington University’s Border Policy Research Institute indicated that nearly 40% of the border crossings into Point Roberts were to purchase petrol, Swenson said, which can yield Canadian drivers a savings of 20% to 30%. That explains why the town has 60 gas pumps, and why petrol stations list prices in litres, which is how fuel is sold in Canada.

Others come to pick up packages at one of the town’s several shipping stores. By using a Point Roberts address, Canadians can receive online shopping from the United States. Not only is the price usually cheaper, but some products can’t be shipped internationally. As geographer Mark Bjelland noted in the academic journal Geographical Review, the number of Canadians with registered mailboxes in Point Roberts is 40 times larger than the number of permanent residents.

The town also has a supermarket packed with more products and produce than could ever be consumed in this tiny community. The International Marketplace grocery tries to make it easier for its customers, noting which products can be taken into Canada: Idaho potatoes, sure; honeycrisp apples, absolutely not. It also has two cash drawers, one each for US and Canadian currency.

And an occasional visitor is drawn by the lure of a medium-rare hamburger. Strict Canadian health codes outlaw the pink-centred patty, feared to carry e coli and other food-borne diseases. But south of the border, anything goes, at least when it comes to grilled meat. Evans said Canadian customers at the golf club aren’t sure how to react when she asks them how they want their burger cooked. “A lot of them are surprised that they have a choice.”

Such oddities are just part of life here.

Driving back across the border into Canada the next day, I thought about how Louise Mugar, co-publisher of the local newspaper, described her community. “Living in Point Roberts is like living in a dream,” she told me. “When you’re in it, it makes sense, but when you get away from it, you say ‘What was that all about?’”

But what she didn’t mention was how the town can quickly grow on you. A few minutes later, sitting in Greater Vancouver’s morning rush-hour traffic with cars backed up miles ahead, Point Roberts, with its quirks, characters and inconveniences, seemed far away – and all the more appealing.