President Akufo-Addo says about 8,000 teachers will be recruited to teach the increasing number of beneficiaries of the New Patriotic Party (NPP) government’s flagship Free Senior High School (SHS) programme in the country this year.

The president who was very cheerful announced that 90,000 people benefitted from the policy in its first year and the number is expected to increase to 180,000 by September this year.

According to him, the NPP administration had put the critics and opponents of the laudable social intervention programme to shame by fulfilling the key campaign promise within just eight months in political office.

“We have put skeptics and naysayers to shame by fulfilling most of our promises to Ghanaians within just one-year and eight months,” he said, adding that the government would definitely succeed.

He disclosed that “90,000 students benefitted from the policy in its first year and the number of the beneficiaries is expected to be doubled, increasing it to 180,000 this year.

“The sharp increase in the number of the beneficiaries of the positive programme has also paved way for 8,000 teachers to be recruited all over the country to teach the swelling number.”

Speaking during the NPP’s Annual National Delegates’ Conference in Koforidua, the Eastern Regional capital on Saturday, the President said some people kicked against the free SHS policy which was implemented last year.

President Akufo-Addo argued that the youth are the future leaders of the country and stressed the need for them to be well educated freely to grow to become influential leaders in the future.

“We should make sure that every Ghanaian of school-going age should be in school to study to help brighten their future prospects,” he stated, adding that education is a top priority of his administration.

The National Delegates’ Conference was under the theme, ‘Building a Stronger Party-Delivering Prosperity to Ghanaians,’ and it was attended by about 6,000 NPP delegates who also voted to elect new executives of the ruling party.

He also stated that his administration has worked hard to restore allowances of trainee teachers and nurses, among others, which have helped to improve the educational sector.

He said the ‘Planting for Food and Jobs’ programme of the NPP administration would create more jobs for people this year.

According to him, maize and rice production have increased significantly in the country since he assumed office, adding that the railway system would experience massive improvement.

He said that the government recently introduced the National Builders Corps (NaBCO) programme to solve unemployment quagmire and that the peace-keeping allowance had been increased from US$3 to US$3.5.

President Akufo-Addo stated that his administration had brought GH¢4.6 billion relief to ordinary Ghanaians, saying “this is money in your pocket”.

He added that the election of MMDCEs would surely come into fruition.

He jabbed previous Mahama administration for failing to institute programmes and policies to develop the country effectively during its long stay in office.

President Akufo-Addo said the three Electoral Commission (EC) commissioners were recently removed from office without malice, noting that the law was strictly followed in connection with their dismissal.

He said his administration wants to streamline the small-scale mining industry so that the devastating effects of mining on the environment, especially on water bodies and farmlands, would reduce, noting that a roadmap to streamline the sector would be rolled out soon.

The president stated that his administration has also been very vibrant in the international arena so far, especially at the Commonwealth and other international bodies.

He entreated NPP members to unite and support the party and government to stay in power for a long time to continue to implement pragmatic policies and programmes to develop the state.

President Akufo-Addo, therefore, admonished his appointees, especially MMDCEs, to build a harmonious relationship with party members in their areas, stating that any appointee that would create problems would not be spared.

“I am the captain of the boat and I will not allow anybody to capsize it,” the president stated.

He indicated that the current administration shall develop Ghana in freedom in line with the principles of the NPP. 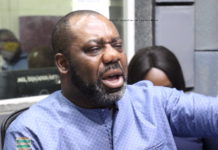