Three persons have been remanded for stealing AGA sub-station electrical cables at Obuasi.

The suspects have been identified as Kwadwo Amoako, 55, Kojo Blay, 51 and their driver, Musah Ibrahim.

They were arrested following a police intelligence through some residents who were on the lookout for the criminals.

The cables are responsible for powering electricity to the company and some parts of the area.

He said a complaint was made on July 25, and surveillance began to arrest the suspects, but they went into hiding for a day.

However, luck run out on their side when some residents spotted cables in an Urvan car they were riding in and alerted the police.

Preliminary investigations revealed that the suspects had burnt the cables and extracted and compressed the copper materials into heavy chains.

Suspects Kwadwo Amoako and Kojo Blay confessed that they were working on the orders of Musa to collect the cables to a house at Sanso, defending that they were not aware the items were stolen.

Police believe that considering the ages of the suspects, they were abetted by some other persons, and an investigation has been launched to arrest all accomplices.

Consequently, the police prayed the court to remand the suspect to aid in the ongoing investigations.

2021 WASSCE: How 2 teachers were arrested for attempting to help students cheat 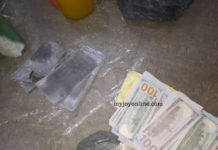