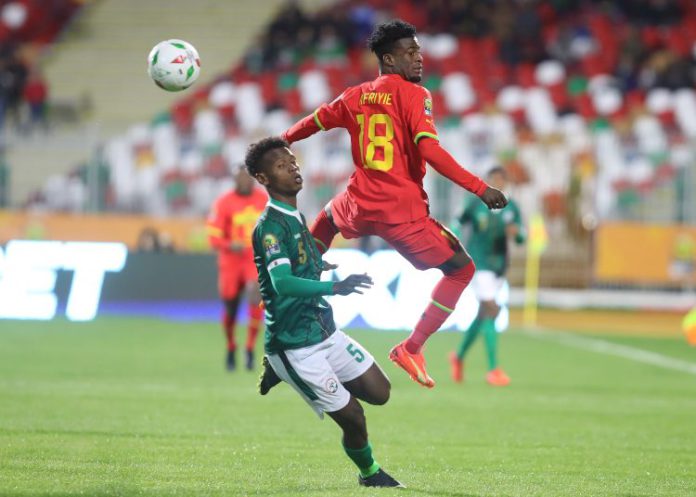 Madagascar made history after defeating Ghana 2-1 in their first-ever game at the TotalEnergies African Nations Championship (CHAN) tournament on Sunday night in the Algerian city of Constantine.

The southern Africans registered their much-deserved win and three points to go top of Group C and announce their presence in Algeria in fine fashion.

Forward Jean Yvon Razafindrakoto controlled the ball well in the Ghanaian penalty area to pass to Solomampionona Koloina Razafindranaivo who was in the right place at the right time and made no mistake in beating Dennis Nkrumah-Korsah to put the ball past Ghana goalkeeper Ibrahim Danlad in the 11th minute.

Razafindranaivo’s celebrations thereafter sliding onto the grass at the corner flag as he was joined by his teammates reflected how much it meant to the islanders that were largely cheered on by the residents of Constantine who came out in their thousands to fill up the stadium in Constantine.

Ghana controlled much of the ball possession in the first half with 60% of it but it was Madagascar who had four of their nine attempts on target while Ghana had none of their six on target.

The Black Galaxies of Ghana kept pressing upfront with Daniel Afriyie Barnieh’s header attempt going off the mark before his next shot went straight into the hands of the Madagascar goalkeeper Zakanirina Rakotohasimbola.

Konadu Yiadom connected a corner kick but sent his attempt way off the mark three minutes into the second half.

The Galaxies continued building momentum and just as they were starting to get comfortable in the pursuit of an equalizer, Augustine Randolf misplaced a back pass to Danlad that was picked up quickly by the attentive Tokinantenaina Olivier Randriantsiferana who slotted home to double Madagascar’s lead in the 62nd minute.

Ghana did not lose hope and as fate would have it, substitute Augustine Agyapong curved a swinger from the right side of the field to catch the unaware and flat-footed Rakotohasimbola to pull one back for Walker Annor’s side six minutes later.

Madagascar were now under pressure but they quickly found their feet and continued believing that they could win the game.

Ghana on the other hand kept pressing for the equalizer and almost came close in the 92nd minute when Kwame Out had his attempt stopped by Rakotohasimbola within six yards before Afriyie picked up on the rebound and he too was denied.

Madagascar held on to win the game and register a historic victory that will be celebrated by their fans back home as they enter a new week on top of Group C at the TotalEnergies CHAN 2022, a tournament that they are playing in for the first time.