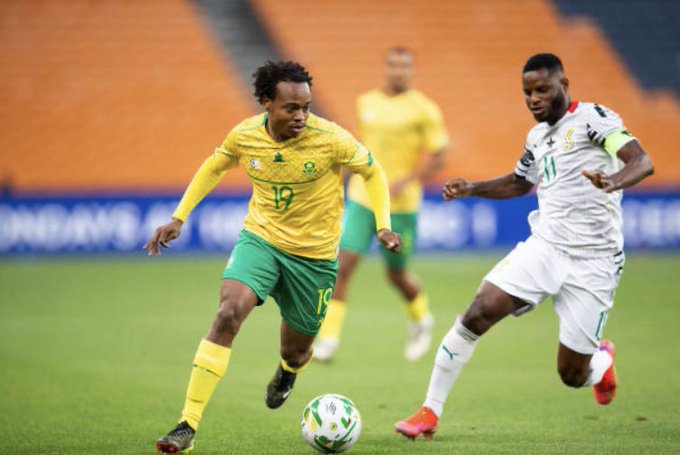 The Black Stars qualified for the 2021 Africa Cup of Nations (AFCON) after a hard-fought draw against South Africa at the FNB stadium.

Ghana took the lead through Mohammed Kudus but shortly surrendered that lead as Percy Tau struck for Bafana Bafana.

South Africa were the dominant side throughout the game creating the clearer opportunities, but Ghana survived after putting up a resilient performance.

Here are five things we learnt from the game:

Ghana qualifies but still work to be done

The Black Stars have secured qualification to next year’s Africa Cup of Nations set to be hosted in Cameroon.

Currently, on 10 points, Ghana have a superior head-to-head than South Africa and Sudan who both play each other in the last round of qualifiers.

Meaning regardless of what happens on matchday six of the qualifiers, Ghana will still qualify.

Despite qualifying, there is a lot of work to do on this team as the Black Stars currently lack a style of play and an identity.

For large periods of the game, Charles Akonnor’s men were second best and were dominated by the South Africans.

If Ghana has ambitions of winning the AFCON soon, Akonnor will need to improve this side drastically.

It’s been more than a year since Akonnor took charge of the Black Stars. However, due to Covid-19, he hasn’t had the chance to really work with the boys, playing just two friendly games and three qualifiers.

In those games, Ghana struggled against Mali, South Africa and Sudan in the reverse fixture. Even in the games won against Sudan and Qatar, the team failed to really establish patterns of play.

It’s understandable because Akonnor hasn’t had a closed group of players to rely on, consistently changing his squad due to the pandemic.

His job has been made harder but time is also running out as the team is expected to put up a good showing in the AFCON next year.

There was a lot of hope when Kwame Opoku started the game especially because he represented the Ghana Premier League after an impressive spell with Asante Kotoko before getting a move to USM Alger.

Strangely, the former Kotoko striker started from the left-wing and barely had a touch of the ball.

Opoku struggled through the game and looked lost playing out wide. He was required to do a lot of defensive work and mostly left Baba Rahman exposed at halftime.

The striker was substituted at half time as he failed to make any necessary impact.

In the absence of key players such as captain Andre Ayew, Thomas Partey and Jordan Ayew, Mohammed Kudus stepped up and took the game on his shoulders.

Throughout the first half, the Ajax midfielder was Ghana’s brightest spark and always looked lively on the ball.

It came as no surprise that the 20-year-old was at hand to score Ghana’s goal after a sweet control on the edge of the box.

At such a young age, the confidence displayed by Kudus is one which gives hope to Ghana.

Starting with a flat front three of Emmanuel Gyasi, Caleb Ekuban and Kwame Opoku meant that the midfielders were largely needed to help progress the ball.

For the most parts of the game, Mubarak Wakaso and Afriyie Acquah saw a lot of the ball but always opted for a back pass instead of moving the ball forward.

As a result, Ghana’s attack was stifled and the attackers were starved off the ball.

The presence of Thomas Partey was hugely missed in the middle of the park as Ghana struggled to dominate the midfield.