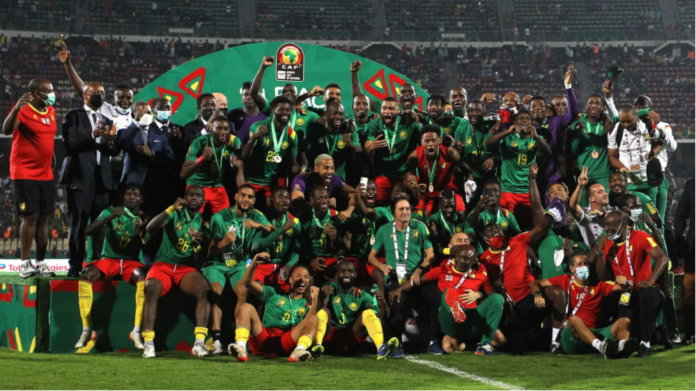 The Indomitable Lions of Cameroon came back from three goals down to beat Burkina Faso on penalties to win bronze following a 3-3 stalemate at the ongoing TotalEnergies Africa Cup of Nations, Cameroon 2021.

The hosts showed character to claim the third place in an absorbing match against the Stallions of Burkina Faso at the Stade Ahmadou Ahidjo in Yaoundé.

Experienced Ambroise Oyongo scored the decisive penalty to win it after Ibrahim Blati Toure his spot for Kamou Malo’s side.

The two sides came into the match after losing their semi-final matches and they showed zeal to fight for the bronze medal.

The Indomitable Lions of dominated the opening exchanges in Yaoundé despite having a much-changed lineup with the tournament’s leading scorers Aboubakar and Ekambi starting on the bench.

Marauding captain Ambroise Oyongo Bitolo found space on the left to place in an inviting cross into the Burkinabe box, which keeper Soufiane Ouedraogo pushed away towards Jean Junior Onana Onana who fired straight at him.

The Stallions weathered the early Cameroonian dominance to break the deadlock through Steve Yago on 24 minutes.

The enterprising midfielder stormed into the Indomitable Lions box to volley past Onana from Issa Kabore’s delivery.

Burkina Faso’s Abdoul Tapsoba was played through on goal but Onana was quick off his line to clear as the Stallions grew in confidence.

They doubled their lead on the stroke of half-time when Andre Onana bundled into his own goal Issa Kabore’s cross to stun the Olembe Stadium and give Burkina Faso a 2-0 lead at half-time.

Djibril Ouattara added salt to the Indomitable Lions wounds when he headed in Bertrand Traore’s cross five minutes after the restart to give Burkina Faso a 3-0 advantage.

The Stallions continued to dominate the match and created few chances through Gustavo Sangare and Issa Kabore but either failed to trouble Onana.

The hosts had to wait until 19 minutes from to pull on back and start their incredible comeback.

Angers striker Stephane Bahoken volleyed in from close range to reduce the deficit after 71 minutes.

Three minutes later Ekambi forced a save from Soufiane Ouedraogo when he cut in from the left to fire towards goal.

Vincent Aboubakar made it 3-2 when he slotted from the back post five minutes from time following a mistake by Soufiane Ouedraogo to register his seventh goal of the TotalEnergies Africa Cup of Nations Cameroon 2021.

The Al Nassr striker still had time to add to his tally three minutes from to complete the comeback for the Indomitable Lions of Cameroon.

Aboubakar latched on to Ouedraogo’s dropped ball to score his eighth goal and forced the match to penalties.

Cameroon made no mistakes from the spot as they converted all five kicks while Burkina Faso’s Ibrahim Blati Toure missed his spot-kick as the Indomitable Lions finished third and win bronze in the tournament.

“I’m very disappointed after this result. We had the game in our hands. We were leading 3-0 before being caught a few seconds from the end of the game. It’s professional misconduct because we had everything to win the game This result comes to ruin our course”.

“It’s hard to explain what happened tonight. We were leading 3-0 and then the Cameroonians came back. It’s a rare situation in football. I’m sad. It’s a first CAN for me. I am discovering the big competitions. I have experienced great things but also difficult situations. We have achieved an excellent course”.

“48 hours after playing extra time, I couldn’t take any risks with the players and that’s why I reshuffled my team. We saw several players play tonight and I’m satisfied with the performance of several players. We have a first objective which was to play the final but it was decided on details in the semi-final against Egypt. Today we demonstrated the strength of character of this group and we won on penalties”.