The Ghana Association of Forex Bureaux says its members are living in constant fear following incessant armed robbery attacks on them in Accra and Tema.
This year alone, over 20 forex bureaux has so far been attacked by armed robbers in Accra and Tema in the Greater Accra Region.
While most of the robbers carried out their attack at night when the operators had closed, a number of them, on the other hand, displayed sheer bravado by holding operators hostage in broad daylight and made away with their safes containing cash.
Some of the bureaux robbed this year include Emmajets Forex Bureau at Baatsonaa; Shan Forex Bureau at Spintex; Forbes Forex Bureau, near Baatsonaa Total; and Golden Expression Forex Bureau, located at Community 18 Junction on the Spintex Road.
The armed robbers succeeded in making away with unspecified amounts of money, including foreign currencies, but affected operators are reluctant to disclose how much they have lost.
Four masked armed robbers last Tuesday attacked Niintason Forex Bureau at Community One, Tema, in broad daylight and made away with money.
The suspects were said to have held the operators of the forex bureau hostage amidst firing of gunshots, before robbing them of both local and foreign currencies in an operation which lasted less than 30 minutes.
Fear engulfed business owners at Trassaco Junction, a suburb of East Legon in Accra, after an attack on Kedze Forex Bureau on Thursday, February 15, 2018.
The robbers raided the bureau in Rambo style and made away with over GHS50,000.
The amount included $1,000 they seized from a foreign national whom they tracked to the place, after which they dashed off on two motorbikes.
The President of Ghana Association of Forex Bureaux, Dr Kwasi Fosu Gyabaa, told The Finder that if the situation is not brought under control by the security agencies as soon as possible, it could collapse the industry.
He expressed worry about the impunity with which the robbers operate, to the extent that the robbers return to some of the forex bureaux they attempted robbing without success the first time.
Dr Gyabaa noted that all the cases have been reported to the police, but unfortunately, the police are yet to arrest any suspect in connection with the robberies.
Meanwhile, the President of Association said the executives also met and issued some directives to members to protect their businesses.
“Those whose insurance has expired have been advised to renew them. Also, they have been advised to build concrete around their safe to make it difficult, If not impossible, for robbers to take them away,” he added.
Dr Gyabaa stated that since the police said forex bureaux are soft targets for robbers, members have been advised to beef up security, including the installation of closed-circuit television (CCTV). 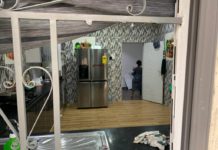