Two Chinese and four Ghanaians have been arrested at Asemkrom in the Aowin Municipality of the Western North Region for their involvement in illegal mining.

The six suspects were nabbed by an Anti-Galamseyers Watchdog in some cocoa farms near the community.

The Public Relations Officer of the Anti-Galamseyers Watchdog, Ali Morro, told Adom News they have placed a surveillance on galamsey hotspots in the districts.

He added that they received intelligence on the illegal activities and embarked on a community to community initiative to fish out the suspects.

The perpetrators were nabbed while undertaking their mining activities.

Also, Mr Morro delivered a strong warning to those who have planned or planning to engage in galamseyer in their area to desist because the youth are ready to fight them squarely.

Currently, the two Chinese together with the four Ghanaians have been handed over to the Aowin Municipal Police Command for further investigation and prosecution. 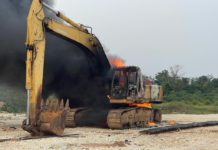 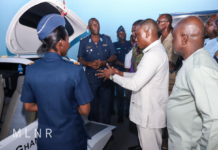 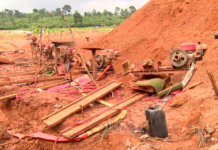 25 out of 43 districts in Ashanti region affected by galamsey