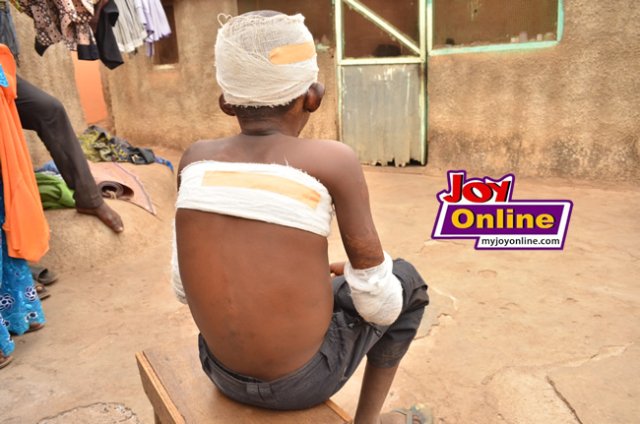 An 11-year-old boy has been doused with petrol and set on fire for spying on a woman in a bathroom.

Ayinbiha Abelinkiira, was two years ago, accused of peeping through a bathroom, to see the nakedness of a woman who was taking a bath – an offence he denies.

He accused two other children who were in his company at the time of the incident of committing the offence. The other two children run away but Ayinbiha did not, because according to him, he did not commit the offence.

Even if he wanted to run away, he could not have, because he was holding a plastic container which carried the petrol they had been sent to buy.

A young man, who was merely an onlooker at the time of the incident, took the container of petrol from Ayinbiha, poured it on his body and set him on fire, as a punishment.

“The man had come there to drink Pito. So when the woman shouted that we had peeped in to see her nakedness, he came to me and asked if I was the one who did that. I told him I was not the one, but rather the other two children who were running away.

“He then snatched the petrol from me and started pouring it on my body. The woman watched him but said nothing. Then, he struck a matchstick and set me ablaze. He said he wanted me to die and waste away,” Ayinbiha narrated. 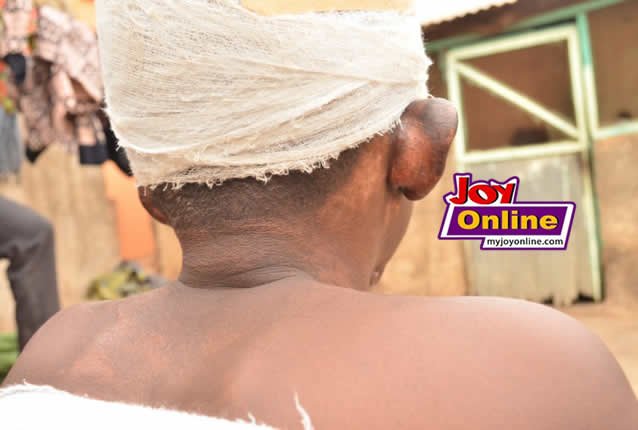 He said he fell to the ground, wailing and kicking in pain until his two friends ran back and started throwing sand at him, in attempt to put out the fire, while the young man looked on.

Other people then came to his rescue. They accosted the young man and insisted that he took Ayinbiha to the hospital for treatment otherwise they would do to him what he had done to the boy.

The assailant was arrested at the hospital after health officials gave police a tip-off.

According to Ayinbiha’s father, they were advised to settle the matter outside of court, so that the assailant whose name they only know as Oldman, could take care of the boy’s medical bills until he fully recovered.

He said they agreed to this because they were also told that the court process will be a drain on their finances, which they could not afford although they could be reimbursed by the assailant. 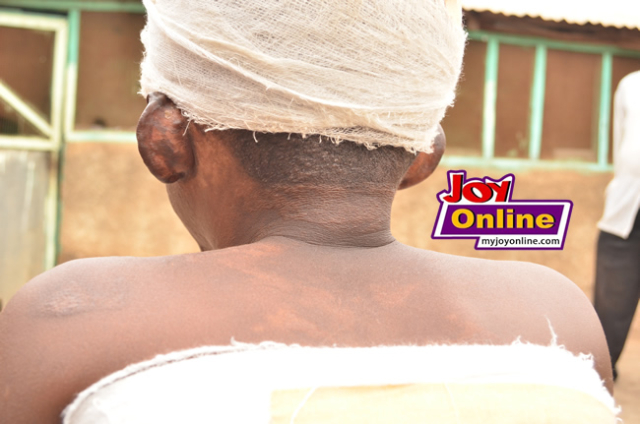 “I was in Kumasi doing menial jobs and could not have afforded the money for the boy’s medical bills. So I felt that since the assailant had agreed to take care of him, there was no need to insist on going to court,” the father said.

However, Ayinbiha’s assailant has reneged on his side of the agreement and has sent the boy back to his family.

According to Ayinbiha, he had been living with the assailant and his family as part of the agreement for them to take care of him but as time went on, they started to maltreat and stigmatised.

“They would shout at me and tell me not to come near them because I had a bad odour. They even gave me a separate drinking cup and a plate and I was not allowed to touch anything in their house. I was in class 4 when the incident took place. I should be heading to class six now but I have not been to school since the incident”.

At the time of Joy News’ visit, Ayinbiha’s injuries had been dressed. His head was bandaged from above the eyes and there were more bandages around his chest region and around his two elbows. The parts of his body that were visible were badly scared.

According to his mother, his whole body had been bandaged in the beginning and it was depressing for her anytime she saw her son at the hospital.

She says presently, there are times when the injuries get so bad, to the extent that nobody wants to sit near Ayinbiha because of the bad smell. 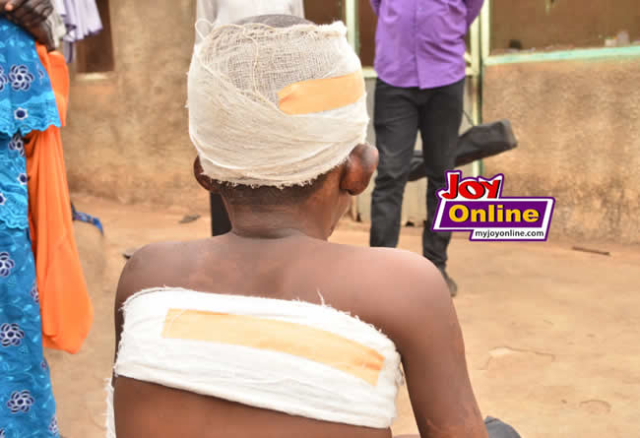 This they say is because sometimes, they are unable to afford the cost of getting the injuries cleaned and the bandages, changed.

“One day, they just brought him back here when no one was at home, then left him and went away. When we contacted them, they told us to keep our child and that they are tired of taking care of him. The man, (that’s the assailant) no longer answers my calls. The last time we met, he accused of me being irresponsible. He said if I had properly looked after my child, he would not have got the chance to do that to him,” the worried mother said.

Ayinbiha’s family wants the help of authorities, to get justice for their son. But not much is known of the boy’s assailant, except that his name is Oldman and his current abode.

For Ayinbiha, even though he wants the assailant to pay for the pains he has caused him, his main concern now is to get proper care, treat his injuries and go back to school.