Some 105 suspects have been rounded up by the Tema Regional Police Command for non-compliance of the government’s directives on the wearing of nose mask as a preventive measure against the spread of Covid-19.

The arrest is a move by the police to enforce the directives on the observation of the Covid-19 protocols.

The suspects, who were arrested going about their usual businesses regardless of the directives, were made up of nine women and 96 men within the age brackets of 17 to 64 years.

Out of the total number, 22 of them had no mask at all while 83 had the masks in their possession but failed to wear them.

Some of the suspects called friends and relatives to bring them mask while under police custody.

All the suspects are currently being meticulously screened at the Command after which further action will be taken.

The Command wishes to use the opportunity to crave the indulgence of the general public to adhere strictly to the government’s directives in order to curtail the deadly virus if not to totally eradicate it.

The operation was carried out in a four-hour operation around Tema Community one on 20th January 2021. 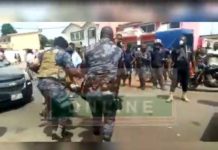