Zylofon FM and Zylofon TV have suspended operations following a directive by the Economic and Organised Crime Office (EOCO) to freeze the assets of Nana Appiah Mensah, the Chief Executive Officer of gold dealership company who Menzgold, who also owns the media companies.

A statement issued by the Communications Manager of Zylofon FM and Zylofon TV, Samuel Atuobi Baah, said the two media networks will from January 30, 2019suspend their operations.

“Owing to the order by the Economic and Organised Crime Office (EOCO) dated 29th January and signed by Jacqueline Avotri (Public Affairs), to have all assets of Nana Appiah Mensah frozen, the general public is hereby informed that Zylofon FM and TV will suspend operations effective 30th January 2019,” the statement reads.

“Being a law-abiding entity, we expect that due process be facilitated to restore sanity.”

Prior to the release of the statement, a mid-morning show host of Zylofon FM, Blakk Rasta, announced that he will not be appearing on the channel till “sanity is restored”.

Last #TaxiDriverShow on @zylofon1021fm till sanity is restored. Thanks for helping me prove again that we’re the best in the game .. #AfricanHistoryClass To Jah be the glory…! pic.twitter.com/5tX5Xz7Dwh

The reggae musician and broadcaster said he was hosting the last edition of his Taxi Driver programme on Zylofon 102.1FM.

“Last #TaxiDriverShow on @zylofon1021fm till sanity is restored. Thanks for helping me prove again that we’re the best in the game .. #AfricanHistoryClass To Jah be the glory…!” he posted. 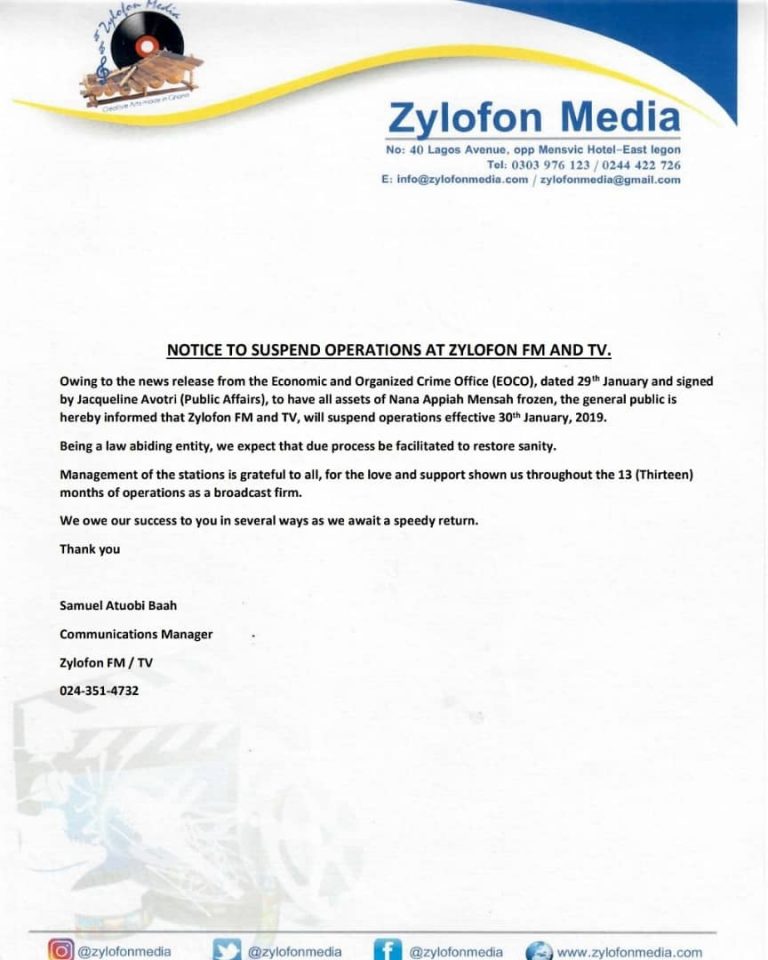 The Financial Court in Accra announced a freeze of the assets of MenzgoldGhana Limited, a gold trading firm, following an application brought before it by the Economic and Organised Crime Office (EOCO).

The EOCO had earlier this month, frozen the accounts of the companies run by the Chief Executive of Menzgold, Nana Appiah Mensah, popularly known as NAM1.

On January 21, 2019, the Financial Division of the High Court, presided over by Ms Justice Helen Amoah, in suit number MSFT/09/2019, endorsed EOCO’s action and accordingly directed that the landed properties and vehicles of the affected companies be frozen until further notice.

Also, two properties located at Trassaco Valley, an uncompleted residence and 510 acres of land have also been frozen.