The Ashanti Regional Secretary of the ruling New Patriotic Party (NPP) has launched a vitriolic attack on a leading member of the opposition National Democratic Congress (NDC), Afrifa Yamoah Ponkoh for bringing the name of Asante Asantehene Otumfuo Osei Tutu II into disrepute.

According to Samuel Pyne, the NDC man needs “mental checkup” linking to the ruling party to the disgraceful money-laundering claims against the monarch after £350,000 was physically transferred into a UK account.

The UK’s Telegraph and Daily Mail reported the revelations in an ongoing tribunal after the bank official, Mark Frank Arthur, who carried the money in a taxi to deposit at the Ghana Commercial Bank in London was fired for flouting anti-money laundering regulations.

In Ghana, the subject has triggered reactions somewhat subdued in certain quarters where the king is held in high esteem.

But there has been no official reaction from the Manhyia Palace but Herbert Mensah who has an enduring friendship with the king has explained there is “nothing peculiar” to the story.

However, Yamoah Ponkoh is quoted to have said on Kumasi-based radio station that some members of the NPP bent on destroying Otumfuo are behind the money-laundering claims. 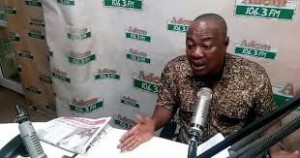 In a riposte, Sam Pyne on Adom FM’s morning show, Dwaso Nsem Friday, expressed disgust at the conduct of the NDC man.

He said as a leading member of the NDC seeking to be a Regional Chairman, Yamoah Ponkoh should have known better.

“Why would you link NPP to such an unfortunate story if you are a responsible politician?. I think Yamoah Ponkoh needs mental check up. This is very bad” he added.

Vouching for the personal integrity of the Asante monarch, the NPP Ashanti Regional scribe said the allegation is not “worth us thinking about it”.

He indicated that, Otumfuo who is not on a salary often receives gifts from subjects and admirers alike thus the money-laundering allegation “should be thrown into the dustbin”.